Tax reports from the State of Kansas for October 2021 show tax revenues falling from the previous month and greater than the same month the prior year.

For fiscal year 2022, which started on July 1, 2021, total tax collections are lower by 2.8 percent over the same period of the previous fiscal year.

Estimates are important because the legislature uses them to make spending decisions. Beyond that, the variance between actual and estimate doesn’t have much meaning. The governor uses a positive variance as a sign of economic success, but this is incorrect. It just as easily means the estimates are wrong, possibly for reasons other than the inherent difficulties of making estimates.

My interactive visualization of Kansas tax revenue has been updated with this data. Click here to use it.

A chart from the visualization, shown below, illustrates the composition of tax revenue in Kansas. Since 2012, two sources have provided the lion’s share of tax revenue. Together, Individual Income Tax and Retail Sales Tax have provided 78 percent of revenue. Adding Corporate Income Tax and Compensating Use Tax, and the total is nearly 91 percent.

The governor’s press release for this data is at Governor Laura Kelly Announces Kansas’ October Total Tax Receipts. As of this writing the report from Kansas Legislative Research Department is not available, but will be on this page when it is prepared. 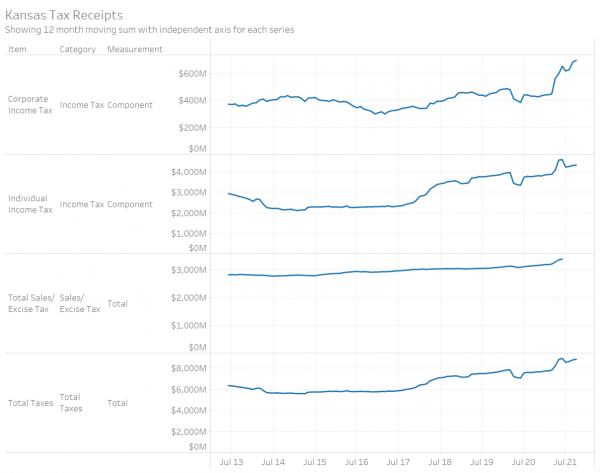 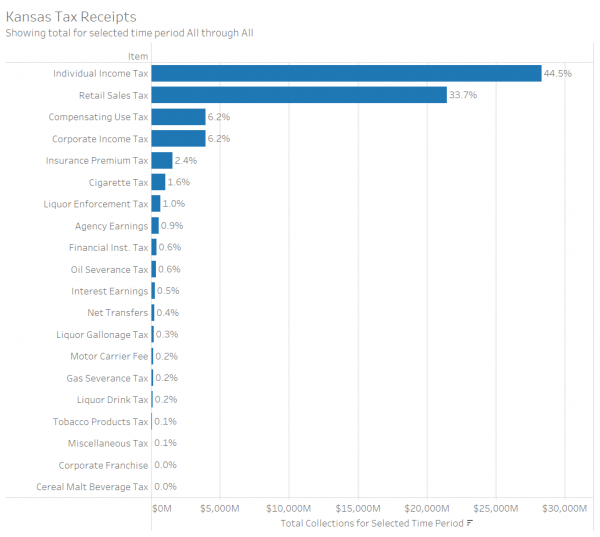