Kansans are not being helped by their stable of newspaper editorial boards. We’ve seen this before (Kansas editorial writers aren’t helping), and the conclusion of the legislative session provides more examples.

An example is the editorial Why are these Kansas politicians celebrating? in the Kansas City Star. A quote is this: “Lawmakers had to go into overtime in the 2013 session trying to figure out how to climb out of the ditch they created last year when they gave away $3.7 billion in income tax cuts without figuring out how to offset them.”

This quotation serves to illustrate much of what’s wrong with Kansas newspaper editorial writing, and also with a large group of Kansas politicians. 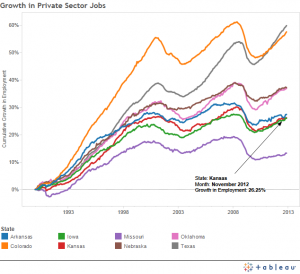 A second problem is the presumption that the Kansas economy has been humming along smoothly, and that efforts to reduce taxes (and therefore government spending) are a change for the worse — the “ditch” that the Star referred to. But I would ask anyone who believes Kansas has been doing well to acquaint themselves with the facts about our economy. An example is the nearby chart (click for larger version) of private sector job growth in Kansas and surrounding states for the past two decades. For most of this period Kansas government has been in the hands of “moderates,” both Republican and Democratic. How would you say cumulative job growth in Kansas compares to our peer states?

Anyone who defends the recent decades of moderation must confront this and similar statistics. If private sector job growth doesn’t convince you, how about personal income growth? An interactive visualization of data from the U.S. Bureau of Economic Analysis is here. The pre-configured view shows income in Kansas growing slower than our peer states, the Plains states, and the United States.

But, editorial writers would rather complain about what the legislature did to “pay for Brownback’s perilous tax experiment.” (H. Edward Flentje : Is Kansas on the right track? Wichita Eagle)

Echoing the sentiment of the left-wing editorial boards, Flentje, a professor at Wichita State University with much practical experience in state and local government, also wrote that the legislature had to “clean up the mess” created by last year’s “financial debacle,” that being the income tax cuts. He also used the “pay for” line of thinking — several times for good measure — as well as tossing in “perilous tax experiment.” (I think I mentioned that earlier, but it bears repeating.)

This left-wing ideology is the prevailing breeze that propels Kansas newspaper editorial boards, along with others like Flentje who ought to know better. For those who disagree, I ask them to defend the record of the Kansas economy under the leadership of coalition of moderate Republicans and Democrats. (For more background, see Kansas traditional Republicans: The record.)

While it’s good that Kansas reduced income tax rates, it’s bad that on the balance, more tax revenue will flow to Topeka. In particular, raising the sales tax (or preventing its reduction, whichever you prefer) was a bad move, and particularly the sales tax on food. Writing in the Wichita Eagle, Kansas Senate President Susan Wagle wrote that Kansas has moved towards more of a “FairTax” model Susan Wagle : Kansas is on the path to prosperity. That’s true in some respects. But an important part of the FairTax model is the “prebate.” This is a monthly advance refund of sales tax on necessities up to the poverty level. Its purpose is to mitigate the regressive nature of consumption, or sales, taxes.

Kansas, however, taxes the sale of food. Furthermore, on July 1 the sales tax on food will be higher than it would be under current law. The new tax law restores a portion of the food sales tax credit program, but this is a clunky measure that will benefit very few people.

The biggest failure of the Kansas legislature this year was that little or nothing was done to reduce spending. In 2011 three bills passed the House that would take a long-term approach to reducing the cost of Kansas government. None of these bills were considered this year. (See In Kansas, there are ways to reduce the cost of government.)

Kansas Policy Institute has also prepared ways that Kansas can save money. See Kansas can cut spending, if we want.

Cutting government spending is important if we want to grow Kansas. See States that Spend Less, Tax Less — and Grow More and To boost jobs and prosperity, Kansas should cut spending.