What are the changes to Kansas tax law that have been passed by the legislature and await the governor’s signature?

The nearby table presents estimated changes in tax revenue based on changes to the law that was current at the time of the estimate. (The source is Kansas Legislative Research Department.) The largest factor in that law was that if the legislature did nothing, the sales tax rate would change from 6.3 percent to 5.7 percent on July 1, 2013. The legislature decided to change the rate to 6.15 percent on July 1. The estimated increase in revenue is estimated to be $193.2 million in fiscal year 2014, and $1,118.5 million total over the next five years. 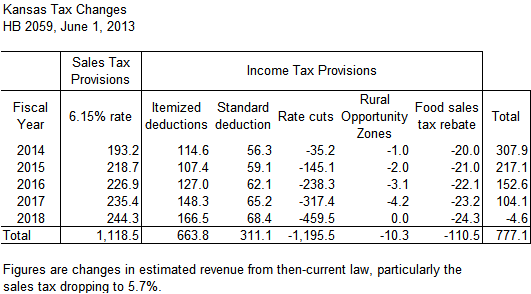 Other changes to the law presented along with the estimated change in revenue.

The most important number to notice is the five-year total: $777.1 million. This is the additional tax revenue that Kansas is expected to collect based on the action of the legislature this year. For the year starting July 1, the number is $307.9 million, which is 40 percent of the five-year total.

Someone asked me whether the tax bill increases taxes on the middle class. It’s hard to answer that question, as several changes were made. Here’s what each change means:

Sales tax: On July the sales tax rate will be less than it has been for the last three years, but more than if the legislature had done nothing. Whether this counts as a tax increase or not is solely in the eye of the beholder. The new tax law, as the chart shows, brings in more sales tax revenue than the law we’ve been living under, so I think that’s a tax increase.

Sales taxes are commonly thought of as regressive, meaning the burden falls disproportionally on the poor or low income. To help with this, the legislature partially restored the food sales tax credit program. This is estimated to refund a little more than $20 million to low-income Kansans to compensate for the sales tax on food.

The mechanism of the food sales tax credit is clunky. One has to file an income tax return to receive it. Further, the credit is now non-refundable, meaning that it can only be used to offset an income tax liability. In tax year 2010, when it was refundable, this credit was worth $59 million to Kansans, but is estimated to provide only $20 million in relief next year.

Standard deduction: Most taxpayers use the standard deduction. Last year, Kansas increased the amount of this deduction, meaning that everyone paid less tax. Currently, it is set at $9,000. The new lax law changes that to $7,500 for married taxpayers filing jointly and to $5,500 for single heads-of-household. This means taxes will rise for most people. A family will pay tax on an additional $1,500 of income, which is an extra $45 or $103.50 in taxes. This change is estimated to raise an additional $56.3 million next year, and $311.1 million over five years.

Tax rate reduction: The new tax bill reduces tax rates. For tax year 2013, the two marginal income tax rates are 3.0 percent and 4.9 percent. The law calls for these to be reduced slowly over the next five years. This change in tax law is estimated reduce revenue by $35.2 million next year, and by $1,195.5 million over five years.

Rural Opportunity Zones: This program provides income tax relief to those who move to eligible counties. Its expansion is estimated to reduce tax revenue by $10.3 million over five years.

Food sales tax rebate: As explained above, this program is expected to reduce revenue to the state by $110.5 million over five years.

So whose taxes went up, and whose went down? The law changes several provisions, and in different directions. None of the changes are particularly large in magnitude, unless you spend a lot or earn a lot. Most people will be paying a different mix of taxes, which will influence their behavior.

The bottom line, though is this: Tax revenue flowing to the state of Kansas is rising.