Kansas has nearly the highest number of local government employees per resident, compared to other states.

These are local government employees only. State and federal government employees are not included. The source of this data is the United States Census Bureau. I’ve gathered it and created an interactive visualization. Additionally, using each state’s population for each year, I’ve also computed the annual payroll on a per-resident basis and the number of full-time equivalent (FTE) employees per thousand residents.

For all local government employees, Kansas had 50.55 employees per thousand residents in 2016, higher than all states (and areas) but the District of Columbia and Wyoming. These employees had an annual payroll of $2,355.09 per resident. Eleven states were higher.

For the country as a whole, the values are 37.33 employees and annual payroll of $2,232.01 per thousand residents.

Considering elementary and secondary education, Kansas had 29.58 such employees per thousand residents. This was higher than all states but Wyoming. The payroll for these employees was $1,237.80 per resident, with thirteen states above Kansas.

Kansas is a small state in terms of population. Might small states have higher needs for employees on a per-resident basis? A plot of employees vs. population shows nearly no relationship between the two. Plots using urban percentage and population density show somewhat stronger relationships, but nothing very significant. (In these plots, I removed the District of Columbia from the data, as it is a special case that is all urbanized.) 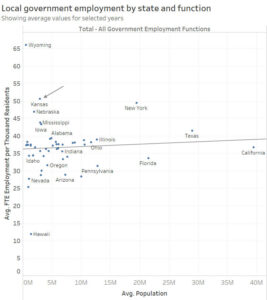 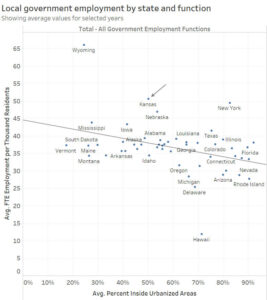 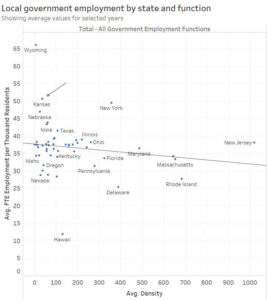 Click here to learn about the visualization and use it to make your own charts and tables.