Public employee unions should be a non-partisan issue 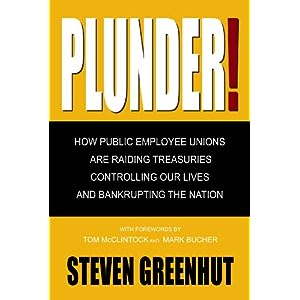 Writing in Hoover Institution Policy Review, John O. McGinnis and Max Schanzenbach state what few seem to recognize: Everyone would be better off without public employee unions:

The authors explain how teachers unions, in particular, are harmful to taxpayers and — most importantly — children in public schools:

Public employee unions impose even more substantial costs on states beyond the unjustified direct benefits their workers receive. Their worst consequence is the distortions they create in the public policy arena. Because of their concentrated influence, they are able to substantially direct — indeed sometimes dictate — the shape of public policy in the area in which they are employed.

The most notorious example is public education. Teachers’ unions are the single greatest obstacle to improving education in this country. Unions are almost universally associated with seniority pay, job tenure (including layoffs based on seniority), inflexible work rules, and lack of productivity-based pay. Teachers’ unions are no exception: They make it difficult or impossible to fire bad teachers, pay good teachers more, or conduct layoffs in a rational fashion. Media reports have recently highlighted the difficulties in New York City. There, teachers earn tenure after only three years on the job, and a hearing to dismiss a teacher take years and costs hundreds of thousand dollars (teachers are paid in full for the duration of such hearings, although they don’t actually do any work). Although the city has stepped up its effort at dismissals, very few teachers are fired for incompetence. In many places, union rules on teacher assignments make it more difficult to match teachers with the pupils for whom they would make the most difference. The unions also make it harder to create flexible schedules that would make more efficient use of school facilities. In some states, such as Minnesota, unions have made it impossible for their educational systems to participate in the Obama administration’s Race to the Top program. In short, the teachers’ unions make the public school rigid, unproductive, and hidebound at great monetary cost to taxpayers and at educational cost to the children that they are supposed to teach.

In addition, because government controls the vast majority of education spending, teachers’ unions can use political power to throttle competition. Because private schools and charter schools do not necessarily employ union members, teachers’ unions see the growth of such schools as a danger to their size and resulting political power. As a consequence, they have tried to obstruct such initiatives at every turn. A recent shocking example is their ability to exert influence over the Democratic Congress in order to end the small-scale school voucher program for low-income students in the District of Columbia.

One does not have to believe that vouchers or charter schools are the solution to problems in education to see the influence of teachers’ unions as pernicious. The nation simply does not have full information about the most efficient way to educate its children or the best way to address a host of social problems. Democracy works through informal experiments. But teachers’ unions make it hard to conduct the necessary experiments, because their focus is simply on protecting the perquisites of their members. And teachers’ unions are extremely powerful. As Steven Brill pointed out in a recent New York Times Magazine article, they have contributed $57 million over the last 30 years to federal campaigns — more than any other union or corporation. And their contributions at the state level are even larger.

Teachers unions wrap themselves around an unimpeachable issue: the welfare of schoolchildren. The unions’ actual conduct, however, harms schoolchildren.

Full article at The Case Against Public Sector Unions.