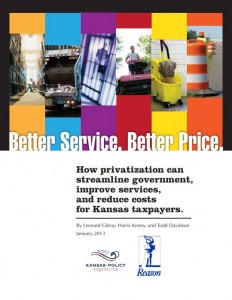 As the 2013 Legislature begins its work the discussion remains focused on implementing last year’s tax reform package. A new study from Kansas Policy Institute makes clear a good deal of the dollars necessary to implement reform without raising taxes, an 8.5 percent efficiency savings, can be achieved via a slate of reforms commonly referred to as privatization. “Better Service, Better Price,” goes through best practices and case studies to arrive at standard cost savings of between five and 20 percent — a good step toward realizing the benefits of HB 2117.

“Too often we’re faced with the false choice of either higher taxes or fewer government services,” said KPI president Dave Trabert. “This paper makes clear that governments at all levels and around the country are refusing that false choice and taking steps to deliver essential services at a better price with better outcomes.”

Privatization reforms include contracting, franchising, and outright divesture of government-owned assets or functions. Examples from around the country demonstrated 130 different outsourcing initiatives in Florida saving $500 million in cash-flow dollars and 345 opportunities for public-private partnerships in the City of Tulsa. The study also highlights existing efforts in Kansas such as the City of Wichita saving $1.3 million annually by outsourcing mowing operations, beginning in 2009, and Kansas State University allowing its on-campus bookstore to be operated by Varney’s, a private entity and previous competitor.

In addition to case studies and establishing the vocabulary of privatization, a good deal of discussion is provided to best practices. Transparency in contracting and purchasing, truly competitive and open bidding, and quality-driven outcomes help protect taxpayer interests when government dollars go to private entities.

“Privatization and public-private partnerships are proven policy tools used by policymakers of all political stripes to control spending and improve public services — something that is more critical than ever given the fiscal challenges that many states and local governments continue to face in the wake of the 2008 recession,” said the study’s lead author Leonard Gilroy, the director of government reform at the Reason Foundation. “It is our hope that this new report will help state and local officials in Kansas better understand the range of potential privatization opportunities at their disposal to help navigate the ‘new normal’ of budget constraints and lower the costs of government to taxpayers.”

Trabert concluded by saying, “With Kansas’ general fund spending having increased by 48 percent in the past decade there are absolutely opportunities for efficiency and savings. In many cases, this could certainly be accomplished by utilizing private sector expertise while at the same time delivering better service to Kansans.”

The document may be read at Better Service, Better Price: How privatization can streamline government, improve services, and reduce costs for Kansas taxpayers.

The Kansas Legislature has considered privatization in recent years. Two years ago a bill passed the House, but did not advance in the Senate. The bill was HB 2194, which in its original form would have created the Kansas Advisory Council on Privatization and Public-Private Partnerships.

According to the supplemental note for the bill, “The purpose of the Council would be to ensure that certain state agencies, including the Board of Regents and postsecondary educational institutions, would: 1) focus on the core mission and provide goods and services efficiently and effectively; 2) develop a process to analyze opportunities to improve efficiency, cost-effectiveness and provide quality services, operations, functions, and activities; and 3) evaluate for feasibility, cost-effectiveness, and efficiency opportunities that could be outsourced. Excluded from the state agencies covered by the bill would be any entity not receiving State General Fund or federal funds appropriation.”

This bill passed by a vote of 68 to 51 in the House of Representatives. It did not advance in the Senate, falling victim to a “gut-and-go” maneuver where its contents were replaced with legislation on a different topic.

Opposing this bill was Kansas Organization of State Employees (KOSE), a union for executive branch state employees. It advised its “brothers and sisters” that the bill “… establishes a partisan commission of big-business interests to privatize state services putting a wolf in charge of the hen house. To be clear, this bill allows for future privatization of nearly all services provided by state workers. Make no mistake, this proposal is a privatization scheme that will begin the process of outsourcing our work to private contractors. Under a privatization scheme for any state agency or service, the employees involved will lose their rights under our MOA and will be forced to adhere to the whims of a private contractor who typically provides less pay and poor benefits. Most workers affected by privatization schemes are not guaranteed to keep their jobs once an agency or service is outsourced.”

Note the use of “outsourcing our work.” This underscores the sense of entitlement of many government workers: It is not work done for the benefit of Kansans, it is our work.

Then, there’s the warning that private industry pays less. Most of the time representatives of state workers like KOSE make the case that it is they who are underpaid, but here the argument is turned around when it supports the case they want to make. One thing is probably true: Benefits — at least pension plans — may be lower in the private sector. But we’re now painfully aware that state government has promised its workers more pension benefits than the state has been willing to pay for.