One of the small news items emerging from the Kansas Republican Party Convention last weekend is that Pat Roberts will run for reelection to the U.S. Senate next year.

So is this a good thing, or not? Gidget of Kansas GOP Insider (wannabe) offers one opinion in her post on the topic:

Look, I like Sen. Roberts. He’s a nice enough guy, but he will not make any waves. He will not rock any boats. I do not understand it. Most 76 year olds are willing to wear purple suits and red hats in public as some sort of matter of pride. It’s their way of saying, I’ve lived long enough I’ll do as I damn well please.

But not Sen. Roberts.

Where every member of the Kansas delegation in the House voted against the plan to avoid the so-called fiscal cliff — there was Roberts being a “statesman” by raising your taxes without the agreement of any cuts.

This is a regularly repeated occurrence for those in the U.S. Senate. They are absolutely willing to sell the people down the river in return for being called “statesman” and getting re-elected.

The truly disgusting part is that we’re all going to vote for Sen. Roberts again. 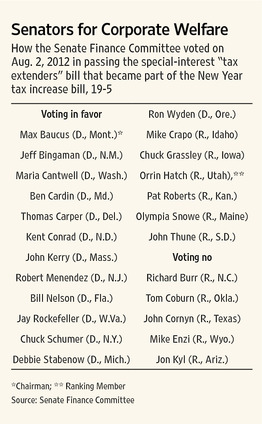 The Wall Street Journal noticed a vote made by Senator Roberts in committee that lead to the fiscal cliff bill. The newspaper explained the harm of this bill in its editorial:

The great joke here is that Washington pretends to want to pass “comprehensive tax reform,” even as each year it adds more tax giveaways that distort the tax code and keep tax rates higher than they have to be. Even as he praised the bill full of this stuff, Mr. Obama called Tuesday night for “further reforms to our tax code so that the wealthiest corporations and individuals can’t take advantage of loopholes and deductions that aren’t available to most Americans.”

One of Mr. Obama’s political gifts is that he can sound so plausible describing the opposite of his real intentions.

The costs of all this are far greater than the estimates conjured by the Joint Tax Committee. They include slower economic growth from misallocated capital, lower revenues for the Treasury and thus more pressure to raise rates on everyone, and greater public cynicism that government mainly serves the powerful.

Republicans who are looking for a new populist message have one waiting here, and they could start by repudiating the corporate welfare in this New Year disgrace.

The Journal took the rare measure of calling out the senators who voted for this bill in committee, as shown in its nearby graphic. There it is: Pat Roberts voting in concert with the likes of John Kerry, Chuck Schumer, and Debbie Stabenow.

If Tom Coburn of Oklahoma could vote against this bill in committee, then so could have Pat Roberts. But he didn’t.