For Kansas progressives, it’s all about school spending, not performance

Once again, Kansans are subjected to a rant by Kansas House of Representatives Democratic Leader Paul Davis. On Facebook, he continually complains about the lack of funding for Kansas schools, recently writing “What do you think is more important: tax cuts for millionaires or funding for your local school?” 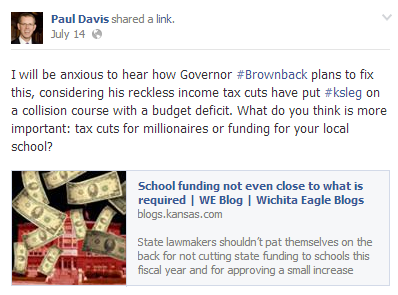 Here are some concepts I wish Davis would explain to his Facebook fans. This might be good practice as he considers a run for the Kansas governorship.

Second, Kansas schools don’t spend all the money they’ve been given, and the pile of unspent cash continues to grow far beyond what is needed for cash flow management.

Third, everyone’s taxes have been cut in Kansas.

But here’s the worst thing Kansas has done. It’s a fact that Paul Davis won’t tell you, and it’s something that is very harmful for Kansas schoolchildren: At a time when Kansas was spending more on schools due to an order from the Kansas Supreme Court, the state lowered its standards for schools.

This is the conclusion of the National Center for Education Statistics, based on the most recent version of Mapping State Proficiency Standards Onto the NAEP Scales.

This project establishes a relationship between the tests each state gives to assess its students and the National Assessment of Education Progress, a test that is the same in all states. As explained in Kansas school standards and other states, Kansas standards are relatively low, compared to other states.

What’s important to know is that Kansas school leaders are not being honest with Kansans as a whole, and with parents specifically. In the face of these findings from NCES, Kansas Commissioner of Education Diane M. DeBacker wrote this in the pages of The Wichita Eagle: “One of the remarkable stories in Kansas education is student achievement. For 10 years straight, Kansas public school students have shown improvement on state reading and math assessments.” (Thank teachers for hard work, dedication, May 27, 2011.)

A year later a number of school district superintendents made a plea for increased funding in Kansas schools, referring to “multiple funding cuts.” (Reverse funding cuts, May 3, 2012 Wichita Eagle.) In this article, the school leaders claimed “Historically, our state has had high-performing schools, which make Kansas a great place to live, raise a family and run a business.”

These claims made by Kansas school leaders are refuted by the statistics that aren’t under the control of these same leaders.

I wonder why Paul Davis doesn’t write about these topics on Facebook.