An often unappreciated mechanism throughout the Kansas budget severely limits the ability of legislators and governors to adapt to changing state priorities. A new paper from Kansas Policy Institute explains.

July 30, 2015 — Wichita — An often unappreciated mechanism throughout the Kansas budget severely limits the ability of legislators and governors to adapt to changing state priorities. These Maintenance of Effort (MOE) requirements are highlighted in a new paper by Kansas Policy Institute and is authored by former state budget director Steve Anderson. MOE stipulations force state and local governments to maintain a constant level of funding for several federal grant programs, most notably Medicaid and the Elementary and Secondary Education Act, two major components of Lyndon Johnson’s “Great Society;” in FY 2014 these two programs accounted for over two-thirds of Kansas general fund expenditures. 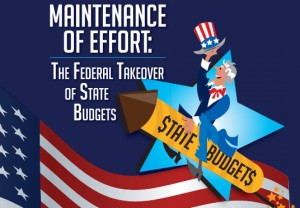 Dave Trabert, president of Kansas Policy Institute, offered the following in conjunction with the release of the paper, “Maintenance of Effort requirements are an end-run on the U.S. Constitution, which prohibits the federal government from dictating how states operate.  The feds use MOE to create contractual obligations that effectively control large chunks of states’ budgets and limit legislators’ ability to make appropriate decisions for their constituents.”

Unfortunately, policy makers are bound by MOEs regardless of the state’s budget situation, changing priorities, or new-found efficiencies. A previous legislature can effectively tie the hands of future elected officials. Sometimes it is even agency bureaucrats who sign up for “free federal dollars” apart from the normal appropriations process with little legislative input.

Steve Anderson, author of the “Maintenance of Effort: The Federal Takeover of State Budgets” and current Senior Fiscal Policy Fellow with KPI, said, “The constitutional right of a state to control the appropriation of their citizens’ tax dollars is too often being abrogated by the federal government’s MOE requirements. This takeover of the state budgets is like an addictive drug from which withdrawal is painful. Unlike a drug, this addiction can be created by prior legislatures, governors or even bureaucrats.  The pervasiveness of MOE goes to almost every function of state government.”

The report outlines several strategies that can be utilized by state governments to mitigate the negative effects of MOEs. One proposal may prove difficult with existing programs but brings some common sense to policy making moving forward — avoid federal funds as much as possible. Conversely, a similar recommendation would be that all new grant programs be approved by the state legislature.

In conclusion KPI President Trabert said, “MOE requirements are not about improving outcomes, but dictating how states operate. Until Congress puts a stop to this practice state legislators must say no to the promise of ‘free money’ from the feds and avoid the problems brought by MOEs.”