Like it or not, we’re coming to plan for you

Democracy is the theory that the common people know what they want, and deserve to get it good and hard.
— H.L. Mencken

We’ve learned that the government planners will plan for you, whether or not you want it. Despite having voted against participation, two Kansas counties are still listed as members of a regional planning consortium. Further, a month after the Butler County Commission sent a letter asking that references to its participation be removed, its name still appears. 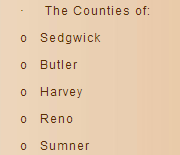 In the logo, on a map, and in narrative, Butler and Sumner counties are listed as participants. But these newspaper headlines say something else about what the elected officials in these counties thought about joining the plan:

I can understand why these counties decided to opt out of the planning process and why two Sedgwick County Commissioners voted against participation.

Cato Institute Senior Fellow Randal O’Toole, in his book The Best-Laid Plans: How Government Planning Harms Your Quality of Life, Your Pocketbook, and Your Future, explains the danger and harm of government plans. I remember two passages in particular:

Somewhere in the United States today, government officials are writing a plan that will profoundly affect other people’s lives, incomes, and property. Though it may be written with the best intentions, the plan will go horribly wrong. The costs will be far higher than anticipated, the benefits will prove far smaller, and various unintended consequences will turn out to be worse than even the plan’s critics predicted.

The worst thing about having a vision is that it confers upon the visionary a moral absolutism: only highly prescriptive regulation can ensure that the vision overcomes an uncaring populace responding to a free market that planners do not really trust. But the more prescriptive the plan, the more likely it is that the plan will be wrong, and such errors will prove extremely costly for the city or region that tries to implement the plan.

We see the vision of moral absolutism on display: Despite two counties voting against participation, their overseers will, nonetheless, create a plan for them.

It’s for their own good, after all.