In 2014 the Wichita Metro Chamber of Commerce, now known as the Wichita Regional Chamber of Commerce, managed a campaign to persuade voters to institute a sales tax in the City of Wichita. The sales tax was to be one cent per dollar for five years, estimated to raise about $400 million in total. Of that, $250 million was to pay for enhancing the ASR water supply project, $80 million for job creation, and lesser amounts for bus transit and street repair.

The sales tax failed to pass, with 62 percent of voters saying no. Since then, the wisdom of voters in rejecting the tax has become evident. For example, the city has developed a plan to provide the same benefits for water supply for over $100 million less.

During the 2014 campaign the sales tax boosters raised campaign money through an organization named Yes Wichita Inc. Over one hundred people and companies contributed $321,527 in cash, and the Chamber of Commerce added $50,818 as an in-kind contribution.

These people and companies contributed money to persuade voters to raise taxes in Wichita. In some cases, a lot of money: $100,818 from the Wichita Chamber of Commerce, $40,000 from Intrust Bank, and $25,000 from Westar Energy.

Some of these people and companies have also contributed to a candidate for the Sedgwick County Commission District 4 Republican primary election. I examined campaign finance reports for matches. It isn’t an exact science. The data is not filed in a way that can be readily analyzed by a computer in a spreadsheet or database. Sometimes donations are made in a company name, and sometimes by owners or executives of the same company. There are spelling errors and variations in how company names are reported. So I may have failed to notice matches, and there is a small chance that I made erroneous matches.

Separately, the Wichita Regional Chamber of Commerce PAC has spent $45,148 on political candidates through August 1 of this year. Of that, $36,665 was spent in favor of one candidate, Hugh Nicks. That’s 81.2 percent spent on one candidate from an organization that contributed $100,818 towards higher taxes. (See Wichita Chamber PAC spends heavily for Hugh Nicks.)

What does this mean: Those who want higher sales taxes in Wichita contribute to Hugh Nicks for Sedgwick County Commission, and he alone? It is a coincidence, mere serendipity?

But the evidence is clear: Those who want higher taxes prefer Hugh Nicks.

Following, a table showing the commonality between contributors to the Yes Wichita sales tax campaign in 2014 and Hugh Nicks. Click for a larger version. 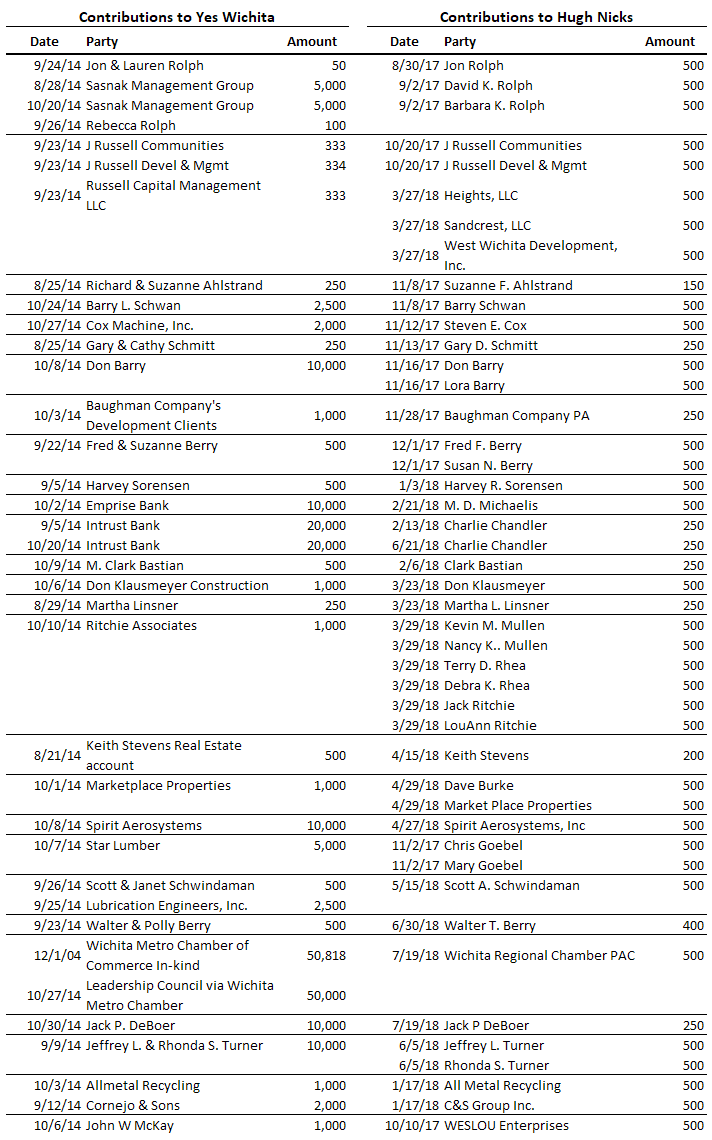