Part of Kansas tax law has something for everyone

The just-signed Kansas tax bill contains a future provision that, based on recent research, may satisfy everyone.

As described by Kansas Legislative Research:

Future formulaic income tax rate relief could be provided under certain circumstances, beginning as early as tax year 2019, based on the extent to which a specified group of SGF tax sources has increased over the previous fiscal year. Generally, rate relief will be triggered under the formula once that group of taxes exceeds the previous fiscal year’s levels (beginning with FY 2018 growth over FY 2017) by 2 percent or more.

What will happen — may happen — is that when state general fund tax receipts increase by more than two percent, some of that increase will be used to “buy down” individual income tax rates.

This is a form of a policy known as tax and expenditure limits, or TELs. These have been implemented in many states, and in many different forms. Kansas has not had a TEL, but starting in fiscal year 2019, we may have one.

While not specifically promoted as a TEL, this law has the same effect: Instead of spending increased tax revenue, that revenue will be given back to taxpayers in the form of lower rates. Sort of, because the state will spend the first two percent, and then tax rates are reduced by something less than the margin above that.

This may happen, or it may not. Fiscal year 2019 doesn’t start for five years and two weeks. A lot may happen between now and then, including several elections. The legislature also may ignore laws it doesn’t like, as when it has sometimes violated the law requiring a 7.5 percent ending general fund balance.

But either way, this TEL has something to benefit everyone. Spending hawks can point to this as an step in reigning in government spending — even if it’s in the distant future. 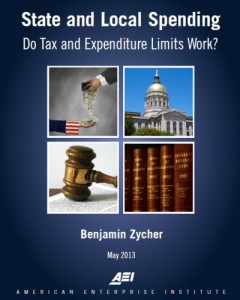 Those who like government spending can take comfort in this: According to recently released research published by American Enterprise Institute, laws like this don’t have have their intended effect.

The executive summary for its paper State and local spending: Do tax and expenditure limits work? reads:

Since 1978, 30 states have enacted formal limitations on taxes, budgets, or outlays as tools with which to strengthen fiscal discipline. These tax and expenditure limits (TELs) vary substantially in terms of their details, definitions, and underlying structures, but the empirical finding reported here is simple and powerful: TELs are not effective.

The almost-universal weakness of TELs is striking, but the empirical evidence by itself does not explain these findings. In part, it is likely that the limits themselves are the products of the same political pressures and election dynamics that yield fiscal outcomes. Moreover, the competition among political interests that results in budget outcomes also is likely to weaken or circumvent limits that otherwise would be effective. This raises a larger overall question: what are the sources of government growth? Five hypotheses are discussed in this study, the upshot of which is that TELs by themselves are unlikely to affect the demand for or the cost of government spending. …

It is likely to be the case that such mechanical tools as TELs cannot substitute for the hard work of long-term public education and persuasion about the central benefits of limited government. In the long run under democratic institutions, popular will is likely to impose sharp constraints on the behavior of government; this means that attitudes must be changed through a process of debate and enlightenment.

So there’s something for everyone: Passage of a law that (on the surface) looks good to one group, but one with little ability to produce its stated goals, which should placate the other group.