For two decades the Tax Foundation has estimated the combined state and local tax burden for all the states. I’ve created an interactive visualization that lets you compare states and see trends in rank over time.

In its publication, the Tax Foundation explains:

For nearly two decades, the Tax Foundation has published an estimate of the combined state and local tax burden shouldered by the residents of each of the fifty states, regardless of the jurisdictions to which those taxes are paid. We argue that it is important to note that a taxpayer’s true tax burden must include the substantial taxes they pay directly or indirectly to out-of-state governments. 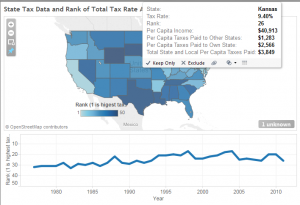 When organizations analyzing federal tax burdens, such as the Congressional Budget Office or the Urban-Brookings Tax Policy Center, measure tax burdens by income group, they go beyond measuring the legal incidence of a tax (who writes the check to the government) and account for the fact that taxes legally imposed on a given person in one income group (such as employers via the payroll tax) can be shifted to a different person in another income group (like employees). Similarly, our state and local tax burden estimates account for the shifting of taxes from one group to another under a different variable by which household are organized: state of residence rather than income level. …

In this annual study, our goal is to move the focus from the tax collector (how much revenue is collected) to the taxpayer (how much income is foregone). We aim to find what percentage of state income residents are paying in state and local taxes and whether those taxes are paid to their state of residence or to others. …

The most recent version of the report is located at Annual State-Local Tax Burden Ranking FY 2011.