With the Wichita City Council pondering the future of Century II, it’s time to take a look at the desirability of government-funded convention centers and arts.

Convention centers, as shown in Should Wichita expand its convention facilities?, are losers as far as providing economic benefit to the cities that build them. Government, too, ought to stay out of the funding and management of arts, if it respects its citizens.

Reading between the lines, it seems like the fate of Century II is sealed. I’d say its future is dim, as hinted at in this material from the agenda packet for Tuesday’s meeting of the city council:

Century II, a multi-purpose convention and performing arts venue was originally completed in 1969, with convention space added in 1985. Century II has served the community well and has provided a venue for a wide variety of events. The building is beginning to show signs of being outdated, as well as losing some of its functionality as a convention center due to the changing needs and requirements of convention clientele, causing the need for a planning and design study to determine current and future feasibility of possible renovations.

On Tuesday the council will consider spending up to $240,000 on what is described as “the initial phase of the design study.” We can anticipate that this contract will eventually cost much more.

Why does government feel it must provide arts to its citizens? The arguments that supporters of government-funded art use generally fall into two categories: That arts funding is good economics, and that since arts are good for life and culture, government must be involved.

Supporters of government art funding make the case that government-funded art is good for business and the economy. They have an impressive-looking study titled Arts & Economic Prosperity III: The Economic Impact of the Nonprofit Arts and Culture Industry in the State of Kansas, which makes the case that “communities that invest in the arts reap the additional benefit of jobs, economic growth, and a quality of life that positions those communities to compete in our 21st century creative economy.” Its single greatest defect is that it makes a simplistic and naive analysis of government spending.

As an example, the report concludes that the return on dollars spent on the arts is “a spectacular 7-to-1 return on investment that would even thrill Wall Street veterans.” It hardly merits mention that there aren’t legitimate investments that generate this type of return in any short time frame. If these returns were in fact true and valid, we should invest more — not less — in the arts. But as we shall see, these returns are not valid in any meaningful economic sense.

Where do these fabulous returns come from? Here’s a passage from the report that government art spending promoters rely on:

A theater company purchases a gallon of paint from the local hardware store for $20, generating the direct economic impact of the expenditure. The hardware store then uses a portion of the aforementioned $20 to pay the sales clerk’s salary; the sales clerk respends some of the money for groceries; the grocery store uses some of the money to pay its cashier; the cashier then spends some for the utility bill; and so on. The subsequent rounds of spending are the indirect economic impacts.

Thus, the initial expenditure by the theater company was followed by four additional rounds of spending (by the hardware store, sales clerk, grocery store, and the cashier). The effect of the theater company’s initial expenditure is the direct economic impact. The subsequent rounds of spending are all of the indirect impacts. The total impact is the sum of the direct and indirect impacts.

This is all true. But there’s a problem with this reasoning. It ignores the unseen effects of economic action. What the authors of this study fail to see is that anyone who buys a gallon of paint for any reason sets off the same chain of economic activity. There is no difference — except that a homeowner buying the paint is doing so voluntarily, while an arts organization using taxpayer-supplied money to buy the paint is using someone else’s money.

The study also pumps up the return on government spending on arts by noting all the other spending that arts patrons do on things like dinner before and desert after arts events. But if people kept their own money instead of being taxed to support the arts, they would spend this money on other things, and those things might include restaurant meals, too. People would spend their money as they think best benefits them, not how someone else thinks they should.

This report — like most of its type that attempt to justify and promote government “investment” in someone’s pet program — focuses only on the benefits without considering secondary consequences or how these benefits are paid for. Henry Hazlitt, in his masterful book Economics in One Lesson explains:

While every group has certain economic interests identical with those of all groups, every group has also, as we shall see, interests antagonistic to those of all other groups. While certain public policies would in the long run benefit everybody, other policies would benefit one group only at the expense of all other groups. The group that would benefit by such policies, having such a direct interest in them, will argue for them plausibly and persistently. It will hire the best buyable minds to devote their whole time to presenting its case. And it will finally either convince the general public that its case is sound, or so befuddle it that clear thinking on the subject becomes next to impossible.

Is anyone else offended, as I am, that government taxes us to provide for us the art that politicians, bureaucrats, and their sycophants think we should consume? What type of personality feels entitled to forcibly make these personal decisions for others?

Arts organizations need to survive on their own merits. They need to produce a product or service that satisfies their customers and patrons just as any other business or human endeavor must. This is especially true and important with something so personal as art. David Boaz, in his book The Politics of Freedom: Taking on The Left, The Right and Threats to Our Liberties writes this in a chapter titled “The Separation of Art and State”:

It is precisely because art has power, because it deals with basic human truths, that it must be kept separate from government. Government, as I noted earlier, involves the organization of coercion. In a free society coercion should be reserved only for such essential functions of government as protecting rights and punishing criminals. People should not be forced to contribute money to artistic endeavors that they may not approve, nor should artists be forced to trim their sails to meet government standards.

Government funding of anything involves government control. That insight, of course, is part of our folk wisdom: “He who pays the piper calls the tune.” “Who takes the king’s shilling sings the king’s song.” 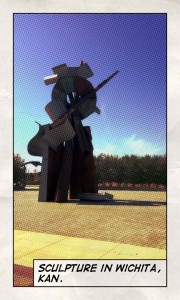 Government art. Is this not a sterling example of an oxymoron? Must government weasel its way into every aspect of our lives? And the fact that government arts funding means tax dollars taken through coercion — don’t the government arts promoters realize this? How better to crush the human spirit — the same spirit that the arts are meant to uplift and enrich.

The more important to our culture we believe the arts to be, the stronger the case for getting government out of its funding. The “leveraging” or “seed” effect of government money is why. In a statement opposing the elimination of the Kansas Arts Commission in 2011, executive director Llewellyn Crain explained that “The Kansas Arts Commission provides valuable seed money that leverages private funds …”

This “seed money” effect is precisely why government should not be funding arts. David Boaz explains:

Defenders of arts funding seem blithely unaware of this danger when they praise the role of the national endowments as an imprimatur or seal of approval on artists and arts groups. Jane Alexander says, “The Federal role is small but very vital. We are a stimulus for leveraging state, local and private money. We are a linchpin for the puzzle of arts funding, a remarkably efficient way of stimulating private money.” Drama critic Robert Brustein asks, “How could the [National Endowment for the Arts] be ‘privatized’ and still retain its purpose as a funding agency functioning as a stamp of approval for deserving art?” … I suggest that that is just the kind of power no government in a free society should have.

We give up a lot when we turn over this power to government bureaucrats and arts commission cronies.

Government arts funding means that artists and arts organizations are distanced from their customers. Instead of having to continuously meet the test of the market, they must please government bureaucrats and politicians to get their funding. Instead of producing what the great unwashed mass of people want, they produce what they think will get government funding.

Without government funding, organizations that provide culture and art will have to satisfy their customers by providing products that people really want. That is, products that people are willing to pay for themselves, not what people say they want when someone else is paying the bill. With government funding, these organizations don’t have to face the discipline of the market. They can largely ignore what their customers really want. They can provide what they think their customers want, or, as I suspect is the case, what they believe the people should want, if only we were as enlightened as the elitists that staff arts commissions.

Without the discipline of the market, arts organizations will never know how their customers truly value their product. The safety net of government funding allows them to escape this reality. We have seen this many times in Wichita and Sedgwick County, as organizations fail to generate enough revenue to cover their costs, only to be bailed out by the government. Other businesses learn very quickly what their customers really want — that is, what their customers are willing to pay for — or they go out of business. That’s the profit and loss system. It provides all the feedback we need to determine whether an organization is meeting its customers’ desires. The arts are no different.

Some say that without government support there wouldn’t be any arts or museums. They say that art shouldn’t be subject to the harsh discipline of markets. Personally, I believe there is little doubt that art improves our lives. If we had more art and music, I feel we would have a better state. But asking government commissions to judge how much art and which art we should have is not the way to provide it. Instead, let the people tell us, through the mechanism of markets, what art and culture they really want.

It might turn out that what people want is different than from what government arts commission members believe the people should want. Would that be a surprise? Not to me. In the name of the people, we should disband government arts councils and government funding and let people decide on their own — without government intervention — how to spend their personal arts budgets on what they really value.

(The material by David Boaz is from a speech which may be read here: The Separation of Art and State.)