It may become more expensive in Wichita

The City of Wichita plans to create a large district where extra sales tax will be charged.

At next Tuesday’s Wichita City Council meeting, the council will consider imposing additional taxes in downtown Wichita and Delano. The new tax district includes the new baseball park and large amounts of surrounding land, some of the land in Waterwalk east of the Arkansas River, and land as far north as First and Waco.

The new tax is known as a Community Improvement District, or CID. In these districts, merchants charge additional sales tax which is used to benefit the owners of property in the district. In this case, the city is proposing to add two cents per dollar to the existing 7.5 percent sales tax.

City documents give this for the use of the funds: “CID revenue will be used for the design and construction of the stadium utilities, parking, and other improvements related to the stadium, river corridor improvements and surrounding development on the west bank, within the district.”

Of note, the city proposes to pass the ordinance on emergency first reading.

Following, a map of the CID. Click for a larger version. 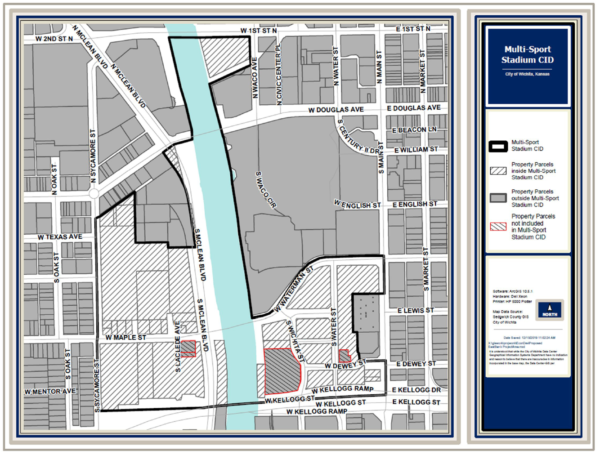