Now that the proposed Wichita sales tax has failed, how should Wichita pay for a future water supply?

At the December 2 meeting of the Wichita city council, discussion by Council member Pete Meitzner (district 2, east Wichita) referred to the recent election in which Wichita voters rejected a proposed sales tax. (Video below, or click here to view at YouTube.) The major portion of the tax, $250 million collected over five years, would have been used to expand the ASR system as a way of providing for Wichita’s future water needs.

What does the arithmetic look like if we pay for a water supply though water bills? (Some use the term rates.) First, let’s set aside the questions of when the city needs an expanded water supply and how that water should be supplied.

Meitzner’s questioning of city public works director Alan King elicited how many water meters or accounts the water department has, which King said is almost 140,000. Meitzner then proceeded to ask if the cost of a new water supply — $250 million — was born equally by each of these customers, how much would that add to water bills? King said it would be in the range of “23, almost 24 dollars per bill, and at the high end something closer to 30 dollars per bill. That would be each month, you would have to pay that for 60 months.”

Meitzner then ran through computations that resulted in a cost of $1,500 per meter over five years to pay for the cost of a new water supply. He then compared that to sales tax opponents who said that the cost of the additional sales tax per family would be $160 per year. Meitzner said that would be an additional cost of $800 over five years to pay for everything the proposed sales tax was dedicated to, not just a new water supply.

The line of reasoning followed by Meitzner is superficially appealing but economically unsound. It is true that water bills would have to rise by quite a bit in order to raise $250 million over five years. But it seems unlikely that the city would decide to spread that cost equally among its water customers. Would the city ask its largest industrial customers to contribute the same amount each month as small households that do no outside irrigation? I don’t think that most people would think this is reasonable. But Meitzner’s arithmetic implies that the city would, or could, do exactly this.

Second, the city could add a fixed amount to each water bill, that money reserved for a future water supply. The city already has a fixed cost for water service. It’s referred to in the rate ordinance as the “minimum monthly” charge. It varies from $11.95 per month for the smallest hookups to $478.78 per month for the largest wholesale users. This amount could be increased by equal portion — say ten percent — for everyone. Or, if the city wants to reduce the burden on small households, it could leave the rate for small hookups as it is, and raise it for larger hookups.

Third, the city could decide to raise the price of a gallon of water by different amounts for different classes of water users. Wichita, like many cities, use a tiered structure of rates that separates summer irrigation water usage from household usage inside the home. How does Wichita’s tiered structure of rates compare to other cities? A recent Black & Veatch survey found for that the 50 cities in the survey, considering only the water portion of bills, the average cost for using 3,750 gallons per month is $19. For using 15,000 gallons, the cost is $65. That’s a ratio of 3.4 to 1. For Wichita, the survey reported costs of $18 and $36, for a ratio of 2.0 to 1.

These are two important numbers: 3.4 and 2.0. They mean that while the price per gallon of Wichita water becomes marginally more expensive as more water is used, the slope is as steep as the average. It means that Wichita households that use low amounts of water pay about average rates, but those Wichita households using a lot of water pay rates much less than average. This is something the city could easily adjust. It would also have the benefit of encouraging conservation, which is something the city says is important for our future.

We need to be aware of the cost of water 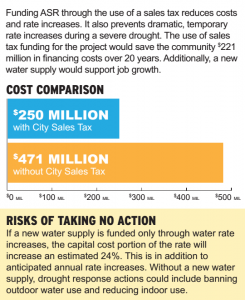 It’s important to have water users pay for a new water supply. The benefit is that water users will become acutely aware of the costs of a new water supply. That awareness is difficult to achieve. Many citizens are surprised to learn that the city has spent $247 million over the past decade on a water project, the ASR program. Nearly all that was paid by using long-term debt, the same type of debt that the city urged citizens to avoid during the sales tax campaign.

Paying for a new water supply through water bills would let commercial and industrial users participate in paying the cost of the project. These water users usually don’t pay a lot of sales tax. A restaurant, for example, does not pay sales tax on the food ingredients it purchases. An aircraft manufacturer does not pay sales tax on the raw materials and component parts it buys. But these companies have a water bill. Yet, the city recommended that low income households pay more sales tax on their groceries. The city said this is the best way to pay for a new water supply to protect our lawns and golf courses during a drought.