How believable are architectural renderings of a Ferris wheel and swimming pool in Wichita?

Over the past year, Wichitans have been presented with architectural renderings of proposed projects. These life-like artistic representations are intended to generate support from clients, be they elected officials, bureaucrats, or voters.

But there’s been a problem. Across the country, some renderings are so vivid, but at the same time totally false, that a term was coined: vaportecture.

We understand that most of these renderings are conceptual. They aren’t meant to have the binding intent of a contract. 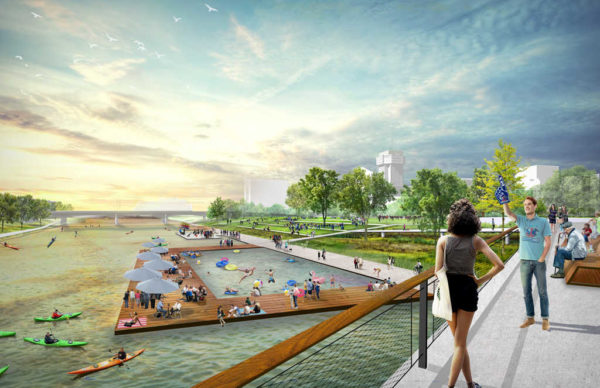 But when a feature is so vivid and specific, like a Ferris wheel or in-river swimming pool, people notice and remember these things. Citizens may believe these features are something that is promised to them in exchange for their support.

I think people understand that these renderings are conceptual, especially for a project in the beginning stages of planning. But that wasn’t the case for the Ferris wheel by the new ballpark. That rendering was presented to Wichitans as the project was being debated for final approval. It is plausible, after all, that there could be a Ferris wheel on the riverbank. That’s why showing the attraction when it was not in the plan is deceptive.

On the in-river swimming pool, the Wichita Eagle reported, “Architects behind the vision say it’s meant to get people thinking, talking and dreaming — not reaching for their haz-mat swimsuits.”

Paraphrasing Neil deMause, the author of the vaportecture article, perhaps the intent of these renderings is misdirection. If we’re caught up in the idea of a Ferris wheel or debating the merits of an in-river swimming pool, attention is diverted from the important details of the project.

This feeling of misdirection is especially significant in Wichita. In less than one year, city hall rolled out a ballpark plan with important details concealed until the last moment, and the city awarded a large water plant contract under a cloud of ethical misconduct. Wichita civic leaders need to earn the trust of citizens, and fantastical — and false — renderings like these don’t help.