Traffic is rising at the Wichita airport. How does it compare to others?

Passenger traffic at Wichita Dwight D. Eisenhower National Airport has been rising. We know that from news reports and social media. While rising activity is good, it’s important to place Wichita in context with other airports.

(The Wichita airport has reported data through April 2019, while comprehensive national data from the Bureau of Transportation Statistics is available through February, so these comparisons are through February.)

Media reporting on the Wichita airport often uses “passengers” as the measure. The industry, however, uses “enplanements” as the most important measure of airport traffic. When Bureau of Transportation Statistics uses the term passengers, the precise meaning of the data is enplanements. 1

Looking at passengers (that is, enplanements) for the Wichita airport, we see that monthly Wichita passenger counts are rising, generally. 2 But not for all months. Over the past year, there were three months when traffic fell, compared to the same month of the previous year. 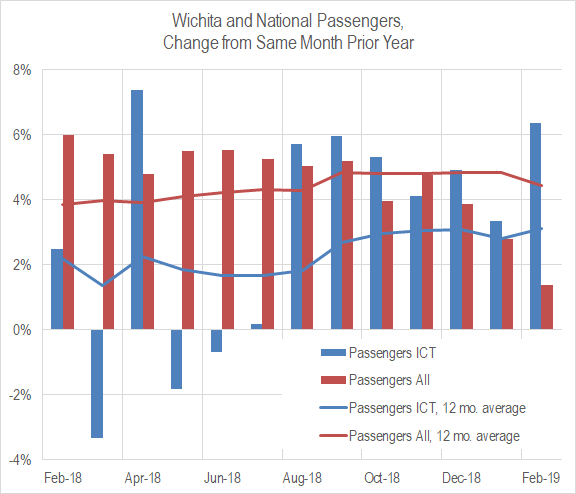 Compared to the nation, there were seven months in the past year when the increase in passengers in Wichita was greater than the change for all airports, as shown in the bars for each month in the nearby chart. Because of several slow months in Wichita coupled with some the of good months in Wichita being only slightly better than the nation, the overall picture is not as good for Wichita. This can be seen by the lines in the same chart, where the change in passengers over the last year is always higher for the nation.

Besides the number of passengers, we should also consider the number of flights departing an airport. This is particularly important to business travelers, as for them, the availability of a flight today or tomorrow may be more important than a bargain-price fare. In this chart, there are some months where the number of flights fell from the year before. The 12-month trend for Wichita is falling while rising for the nation. 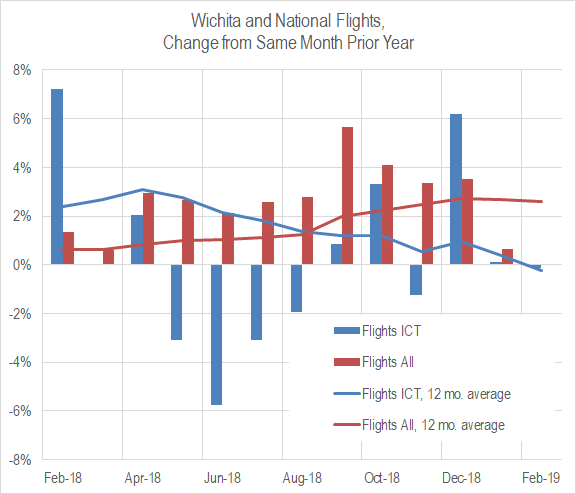 In the following chart of passengers, Wichita counts are generally rising, but not as fast as the nation. This data is indexed with January 2011 representing 100. The thicker lines are the average of the prior 12 months in order the smooth the seasonality of the monthly data. 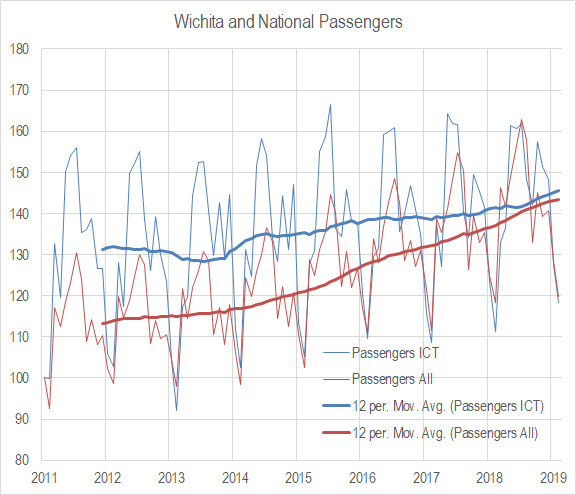 In the following chart of the number of flights, Wichita is on a downward trend generally, although in the last two years the value has increased slightly. 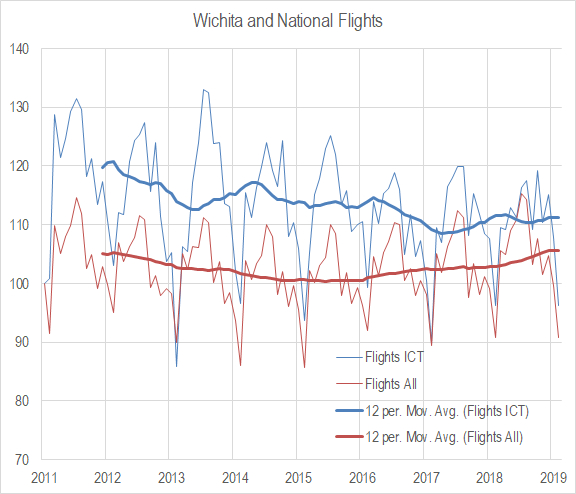