Compared to its peers, the government sector in Wichita is growing fairly quickly, but the private sector is growing slowly.

One of the benchmarks used by Visioneering Wichita to gauge the growth of the Wichita-area economy may not be the best measure, and its interpretation requires caution.

The measure is per-capita personal income. Its presentation may be seen here. Some of the issues with per capita measures are explained by Dave Trabert of Kansas Policy Institute:

Per-capita income is a bad measurement because it rewards cities that are losing people due to domestic migration and punishes those who are gaining.

Even without the per-capita issue, personal income is not a clean measure. Personal income can increase because federal transfer payments grew, employers had to spend more to provide health care benefits, and other items that have nothing to do with measuring relative economic growth.

Last year KPI explained how the mathematics of per-capita measures can produce results that seem paradoxical. The current edition of Rich States, Poor States has a section devoted to these problems. Here’s an explanation of a scenario that requires caution to interpret:

Further, the residents of a state can be better off even if that state’s per-capita or median income decreases. If, for example, 50,000 low income agriculture workers move into Texas, those workers’ incomes almost surely rise (or else they would not have moved there). The residents and business owners in Texas who benefit from their labor services are better off, and the final result is that no one is worse off. But the per-capita income in Texas may actually go down if the low income agricultural workers earn less than the state’s average wage.

To help better understand economic growth in Wichita and its peers, I’ve gathered gross domestic product (GDP) figures for the Wichita metropolitan area and the peer metropolitan areas Visioneering has selected. GDP is value of all the finished products and services produced, and is the most comprehensive measure of economic activity. I’ve also looked at private sector GDP and government GDP. 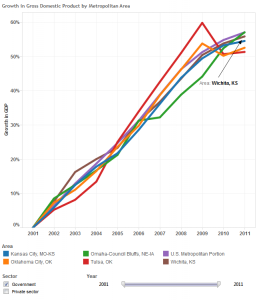 To the left, we see growth in GDP for the government sector. (Click for a larger version.) This data is indexed, so that each area starts at the same relative level and we can compare the relative growth over a period of years. Wichita, the brown line, is not far from the top, meaning that value produced in government jobs has grown faster than in most of our peers. 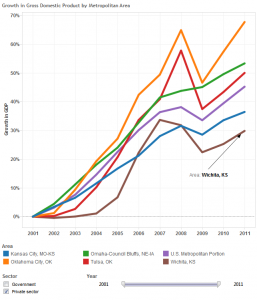 Next, is a chart of growth in GDP for the private sector. (Click for a larger version.) It is here that we see how poorly the Wichita-area economy has performed. The private sector is growing very slowly in Wichita, compared to our peers.

When we compare the per-capita figures with the absolute figures, we see that while Wichita performs poorly on a per-capita basis, it performs even worse on an absolute basis.