Many people make campaign contributions to candidates whose ideals and goals they share. This is an important part of our political process. But when reading campaign finance reports for members of the Wichita City Council, one sees the same names appearing over and over, often making the maximum allowed contribution to candidates. Their spouses also contribute.

Looking at the candidates these people contribute to, we find that often there’s no commonality to the political goals and ideals of the candidates. Some contribute equally to liberal and conservative council members. At first glance, it’s puzzling.

But then, when these people appear in the news after having received money from the Wichita City Council, it snaps into place: These campaign donors are not donating to those whose ideals they agree with. They’re donating so they can line their own pockets.

All told, parties associated with the proposed Douglas Place/Ambassador Hotel project contributed at least $24,500 to current city council members during their most recent campaigns. This is split between two groups of people: executives associated with Key Construction and their spouses, and David Burk and his wife.

At a recent city council meeting, Mayor Brewer, along with council members Janet Miller and Lavonta Williams expressed varying degrees of outrage that people would link their acceptance of campaign contributions with their votes and conduct as officeholders.

But Burk and some others often make the maximum contribution to all — or nearly all — candidates, even those with widely varying political stances. How else can we explain Burk’s (and his wife’s) contributions to big-government liberals like Miller and Williams, and also to conservatives like Jeff Longwell, Pete Meitzner, and former council member Sue Schlapp?

Burk and the others must be expecting something from these campaign contributions. There’s no other reasonable explanation. Candidates and officeholders who accept these contributions know that Burk and his business partners are likely to appear before the council asking for money. If they find this distasteful or repugnant, they could simply refuse to accept Burk’s contributions, as well as those from people associated with Key Construction. But they don’t.

This is what writers like Randal O’Toole mean when he wrote “TIF puts city officials on the verge of corruption, favoring some developers and property owners over others.”

Some states and cities have “pay-to-play” laws which govern conduct of officeholders who have accepted campaign contributions from those seeking government contracts. An example is a charter provision of the city of Santa Ana, in Orange County, California, which states: “A councilmember shall not participate in, nor use his or her official position to influence, a decision of the City Council if it is reasonably foreseeable that the decision will have a material financial effect, apart from its effect on the public generally or a significant portion thereof, on a recent major campaign contributor.”

If Wichita had such a law, the city council couldn’t muster a quorum of its members to vote on the Douglas Place project, so pervasive are the campaign contributions.

In Wichita city elections, individuals may contribute up to $500 to candidates, once during the primary election and again during the general election. As you can see in this table complied from Wichita City Council campaign finance reports, spouses often contribute as well. So it’s not uncommon to see the David and DJ Burk family contribute $2,000 to a candidate for their primary and general election campaigns. That’s a significant sum for a city council district election campaign cycle. Click here for a compilation of campaign contributions made by those associated with the Douglas Place/Ambassador Hotel project. 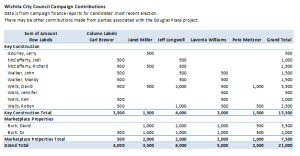 This article has been updated to include information from campaign finance reports filed in January 2012.