A Wichita company asks for property and sales tax exemptions on the same day Wichita voters decide whether to increase the sales tax, including the tax on groceries.

This week the Wichita City Council will hold a public hearing concerning the issuance of Industrial Revenue Bonds to Spirit AeroSystems, Inc. The purpose of the bonds is to allow Spirit to avoid paying property taxes on taxable property purchased with bond proceeds for a period of five years. The abatement may then be extended for another five years. Additionally, Spirit will not pay sales taxes on the purchased property.

City documents state that the property tax abatement will be shared among the taxing jurisdictions in these estimated amounts:

No value is supplied for the amount of sales tax that may be avoided. The listing of USD 259, the Wichita public school district, is likely an oversight by the city, as the Spirit properties lie in the Derby school district. This is evident when the benefit-cost ratios are listed:

The City of Wichita has a policy where economic development incentives should have a benefit cost ratio of 1.3 to one or greater for the city to participate, although there are many loopholes the city regularly uses to approve projects with smaller ratios. Note that the ratio for the Derby school district is 1.00 to one, far below what the city requires for projects it considers for participation. That is, unless it uses one of the many available loopholes.

Of note, the Derby school district extends into Wichita, including parts of city council districts 2 and 3. These districts are represented by Pete Meitzner and James Clendenin, respectively.

The city’s past experience 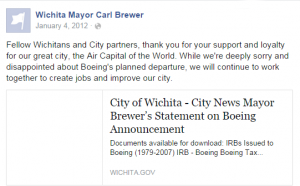 Spirit Aerosystems is a spin-off from Boeing and has benefited from many tax abatements over the years. In a written statement in January 2012 at the time of Boeing’s announcement that it was leaving Wichita, Mayor Carl Brewer wrote “Our disappointment in Boeing’s decision to abandon its 80-year relationship with Wichita and the State of Kansas will not diminish any time soon. The City of Wichita, Sedgwick County and the State of Kansas have invested far too many taxpayer dollars in the past development of the Boeing Company to take this announcement lightly.”