Wichita economic development: We can’t be satisfied with this

Today as the Wichita City Council approved another round of cronyism and business welfare in the name of economic development, Mayor Carl Brewer spoke approvingly of the city’s efforts in this regard.

As quoted by the Wichita Eagle, Brewer said this of his critics:

“We recognize you can make any argument you choose,” Mayor Carl Brewer said. “Cities that prosper, the things they have to do … is make investments to do things. As long as we’re putting people to work and creating an environment … where new businesses come to our community, it provides the opportunity to grow new business.”

If the mayor and council believe what we’ve been doing has created prosperity and jobs, I wish he would take a look at numbers. When we compare the Wichita MSA to other areas and the country as a whole, we realize we’re not doing well at all. 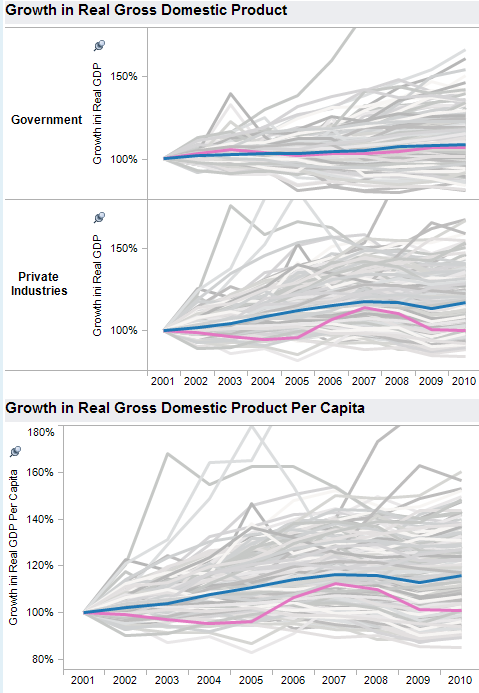 This illustration shows GDP growth for the Wichita MSA (purple line) as compared to U.S. metropolitan areas (blue line) and all other MSAs (dimmed lines). I use data for MSAs because that is what is made available. Also, the city and county like to talk about a regional approach.

The top two charts show the growth in GDP for government, and then for the private sector. The bottom chart shows growth in GDP per capita (per person).

What can we observe from these charts? First, when considering output generated by government, Wichita tracks right along with the average U.S. MSA.

But when looking at GDP generated by private industry, Wichita does worse than the average of U.S. MSAs. There are not many MSAs that perform worse than Wichita.

If you would rather measure jobs instead of gross domestic product, see here for charts that tell the same story in different words: Wichita economic development solution, postponed.

Even if we believe that an active role for government in economic development is best (and I don’t believe that), we have to conclude that our efforts aren’t working. Carl Brewer has been on the city council or served as mayor since 2001, which is the time period illustrated in these charts.

Brewer, most city council members, and the city’s bureaucratic staff believe in taking an active role in economic development. Their vote to approve such action today is another in a long line of efforts to improve the economic performance of Wichita.

But I would ask Mayor Brewer and the council: How can you argue that this record reflects success?

(Dollar amounts are in chained 2005 dollars to eliminate the effects of inflation. Each metropolitan area is indexed to start at 100% so we can see the relative rates of growth. Data from U.S. Bureau of Economic Analysis (BEA). The interactive version of this visualization is at Growth in Gross Domestic Product by metropolitan area.)