Wichita Mayor Carl Brewer is concerned about misinformation being spread regarding the proposed Wichita sales tax.

In its informational material, the city presents two choices for paying for a new water supply: Either (a) raise funds through the sales tax, or (b) borrow funds that Wichitans will pay back on their water bills, along with a pile of interest. 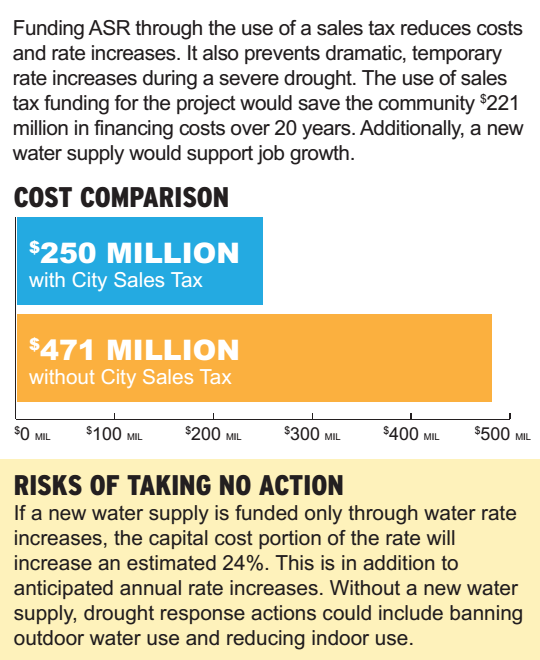 As you can see in the nearby material prepared by the city, the costs are either $250 million (sales tax) or $471 million (borrow and pay interest). The preference of the city is evident: Sales tax. The “Yes Wichita ” group agrees.

Are there other alternatives to these two choices? Could we raise the funds through water bills over the same five-year period as the proposed sales tax? Would this let commercial and industrial water users participate in the costs of a new water supply?

Last week I posed this question at a Wichita water town hall meeting. Wichita Director of Public Works Alan King responded yes, this is possible, adding “I think you’re right. I think that there’s more than one alternative to funding.” A video excerpt of this meeting is available here.

The response of the city’s public works director contradicts the possibilities the city presents to voters. Is this an example of the type of misinformation the mayor wants to clear up?

Last week Mayor Carl Brewer told the Wichita Eagle “We decided to do a mailer because there was a lot of misinformation that was going out where people didn’t quite understand what was going on. By doing the mailer, we’re able to educate everyone.”

The city spent $47,000 sending the mailer. But as we see, it has only contributed to the misinformation.

The city’s threat to voters

Here’s what is happening. City hall gives us two choices. It’s either (a) do what we want (sales tax), or (b) we’ll do something that’s really bad (borrow and pay interest). Wichita voters shouldn’t settle for this array of choices.

Pass the sales tax, or we will do again what we did to pay for the current ASR project. And that would be bad for you and the city.

Are there other alternatives for raising $250 million for a new water source (assuming it is actually needed)? Of course there are. The best way would be to raise water bills by $250 million over five years. In this way, water users pay for the new water supply, and we avoid the long-term debt that city council members and “Yes Wichita” seem determined to avoid.

Water bills would have to rise by quite a bit in order to raise $250 million over five years. The city could decide to raise rates by different amounts for different classes of water users. The city could adjust its tiered residential rate structure to be more in line with the average of other large cities. (See Wichita water rates seen as not encouraging conservation.) But the total cost of the higher water bills would be exactly the same as the cost of the sales tax: $250 million.

It’s important to have water users pay for a new water supply. The benefit is that water users will become acutely aware of the costs of a new water supply. That awareness is difficult to achieve. Many citizens are surprised to learn that the city has spent $247 million over the past decade on a water project, the ASR program. Almost all of that was paid for with long-term debt, the same debt that the city now says is bad.

Paying for a new water supply through water bills would let commercial and industrial users participate in paying the cost of the project. These water users usually don’t pay a lot of sales tax. A restaurant, for example, does not pay sales tax on the food ingredients it purchases. An aircraft manufacturer does not pay sales tax on the raw materials and component parts it buys. But these companies do have a water bill. Yet, the city recommends that low income households pay more sales tax on their groceries. The city says this is the best way to pay for a new water supply to protect our lawns and golf courses during a drought.