The City of Wichita is fond of saying that it hasn’t raised its mill levy in many years. But the mill levy has increased in recent years, and the use of the tax revenue has shifted. 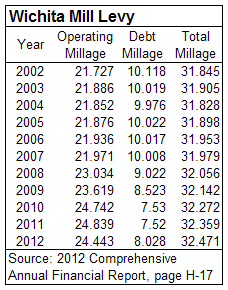 In 2002 the City of Wichita mill levy rate was 31.845. In 2012 it was 32.471, based on the city’s Comprehensive Annual Financial Report. That’s an increase of 0.626 mills, or 1.97 percent. The Wichita City Council did not take explicit action to raise this rate. Instead, the rate is set by the county based on the city’s budgeted spending and the assessed value of taxable property subject to Wichita taxation. While the city doesn’t have control over the assessed value of property, it does have control over the amount it decides to spend. 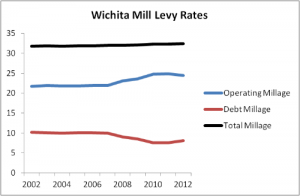 This shift has not caused the city to delay paying off debt. This city is making its scheduled payments. But we need to recognize that approximately 2.5 mills (now about 2 mills) that could have been used to retire debt has instead been shifted to support current spending. Instead of spending this money on current consumption — including economic development spending that has produced little result — we could have, for example, used that money to purchase some of our outstanding bonds.

The video below is of interest as it provides insight into the level of knowledge of some elected officials and city staff.