The Wichita ASR water project produced no water in September, despite many days when river flow was adequate.

In September 2015, the ASR project recharged no water. The ASR project is able to draw from the Little Arkansas River when the flow is above 30 cfs. As can be seen in the chart of the flow of the river, the flow was above this level for many days. There were 18 days in September when there was adequate river flow for ASR to operate, counting only those days when the flow was above 30 cfs for the entire day.

The city has not provided an explanation as to why the project is recharging so little water.

I’ve produced a chart of the cumulative production of the Wichita ASR project compared with the original projections and the lower revised projections. The lines for projections rise smoothly, although it is expected that actual production is not smooth. The second phase of ASR was completed sometime in 2011, but no water was produced and recharged that year. So I started this chart with January 2012.

2013 was a drought year, so to present ASR in the best possible light, I’ve prepared a chart starting in July 2013. That was when it started raining heavily, and data from USGS shows that the flow in the Little Arkansas River was much greater. Still, the ASR project is not keeping up with projections, even after goals were lowered. 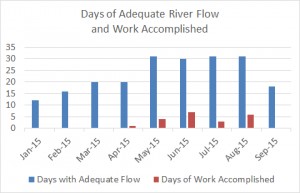 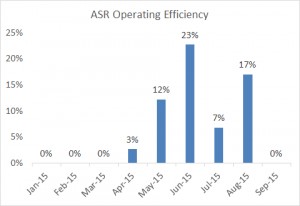