Now that the Wichita City Council has all but recommended that voters raise taxes in order to spend $250 million for water supply enhancements, citizens need to consider recent history and how current decisions are made.

Through the Community Investments Plan process and by other means, citizens have told the City of Wichita they’re concerned about future water supply.

Those who have been paying attention might be surprised that there is a water crisis. That’s because when Bob Knight was mayor, he was told that Wichita had sufficient water for the next 50 years. That was about eleven years ago. 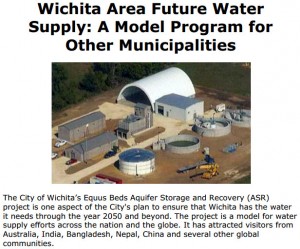 More recently, the city prepared a document in March 2013 titled Wichita Area Future Water Supply: A Model Program for Other Municipalities. It touts an expensive investment that is part of a “plan to ensure that Wichita has the water it needs through the year 2050 and beyond.”

The project boasted of is the City of Wichita Aquifer Storage and Recovery Program or ASR. Its cost, so far for Phases I and II, is $247 million. According to the document, two more phases are contemplated.

Reading the document, published just last spring, one might be led to believe that everything is fine, water-wise: “In 1993 the Wichita City Council adopted an Integrated Local Water Supply Plan that identified cost effective water resources that would be adequate to meet Wichita’s water supply needs through the year 2050.”

But earlier this year the Wichita Eagle reported “Wichita’s $240 million aquifer storage and recovery program — promoted to taxpayers in the early 1990s as a way to supply the city with water for 50 years — could soon be relegated to serving as a bit player in the city’s long-term water future.”

Later in the same article, the newspaper reported “The ASR project has been plagued by problems, city officials said, including equipment failures and a significant drought that idled the project because of low water levels in the Little Arkansas River.”

It appears the plan the city council favors is to expand the ASR project at a cost of $250 million, thereby doubling the amount spent on this project. Some council members have noted the low utilization of the ASR and see its expansion as a way to wring greater efficiency from the plant.

But this mode of thinking is not rational. What has been spent on the ASR is now properly classified as sunk costs. These are costs that have been spent and can’t be recovered. Sunk costs are not relevant to future decisions. Instead, the city needs to focus on the marginal improvements that can be made, and how to get the best value for these future costs.

That’s the economic way of making decisions. But, of course, decisions on Wichita’s future water supply are being made in the political sphere.

How did Wichita get in this position?

It’s vitally important that Wichita develop a plan for an abundant water supply. At the same time, we ought to be asking, as does Johnny Stevens, how this problem developed. The Wichita Business Journal reported this last summer:

Wichita officials — thanks to a couple of weeks of rain — said they were able this week to dodge possible water restrictions and punitive measures as a means of coping with the ongoing drought.

But Wichita developer Johnny Stevens voiced to me today something I have heard from others in the community recently.

“How did it even get to this point?” Stevens said. “It shouldn’t have gotten this far.”

Stevens thinks poor leadership is to blame and can’t understand how elected officials ever let the community seemingly come so close to the edge of such a critical issue.

He said long-term solutions are needed, but he also warns that they have to be made using solid data. Continue reading at Developer Johnny Stevens on water issue: How did it get to this?

Long-term thinking: This is not characteristic of political leaders, whose time horizon rarely extends beyond the next election season. Are there other ways to secure water for Wichita? Is Wichita considering private-sector solutions?