How welcoming is Wichita city government to citizens? There is a survey to answer this question.

Survey respondents were asked to rate “the job Wichita does at welcoming citizen involvement.” The results are shown in the nearby chart created from data in the most recent version of the Wichita Performance Measure Report. The numbers are the percent of respondents giving “excellent” or “good” as their response to the question. 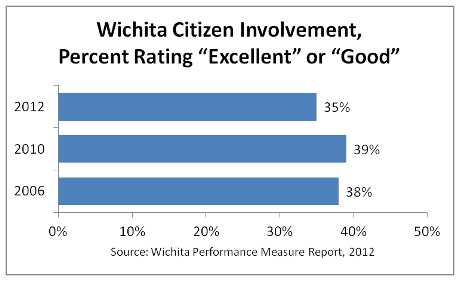 The report says this performance is “much below” a benchmark set by the National Research Center National Citizen Survey.

The report tells us that the city expects to re-survey citizens in 2014. For that year, the city has given itself the lofty target of 40 percent of citizens rating the job Wichita does at welcoming citizen involvement as excellent or good.