In Wichita, we’ll not know how this tax money is spent

Despite claims to the contrary, the attitude of the City of Wichita towards citizens’ right to know is poor, and its attitude will likely be reaffirmed this week.

This week the Wichita City Council will consider approval of a contract with Visit Wichita, the city’s convention and visitor bureau. Once again, citizens will be left out of knowing how the city’s tax money is spent.

In the past, I’ve asked that Visit Wichita (formerly Go Wichita Convention and Visitors Bureau) make its spending records available. It’s the same type of information that the city will send you about its own spending. But for Go Wichita, spending must — apparently — be kept secret.

It’s not a small amount of money that will be spent in secret. This year the city will send Go Wichita almost $2.5 million.1

But that’s not all. Since the implementation of the “City Tourism Fee” Visit Wichita collects 2.75 percent of hotel bills. (Welcome to Wichita! Here’s the bill for your tourism fee!) That’s estimated to generate $3 million in 2017.2

That is a lot of tax money, and also a high proportion of the agency’s total funding. We don’t have IRS filings from Visit Wichita since the city tourism fee started, so it’s difficult to say what portion of its funding is tax money. But it’s a lot, at least 90 percent.

Despite being nearly totally funded by taxes, Visit Wichita refuses to supply spending records. Many believe that the Kansas Open Records Act requires that it comply with such requests. If the same money was being spent directly by the city, the records undoubtedly would be supplied. 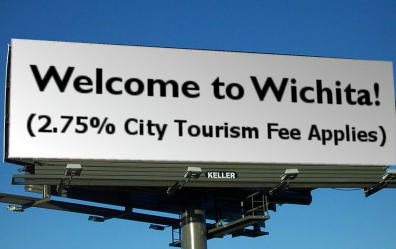 The lack of transparency at Visit Wichita is more problematic than this. Visit Wichita refused to provide to me its contract with a California firm retained to help with the re-branding of Wichita. When the Wichita Eagle later asked for the contract, it too was refused. If the city had entered into such a contract, it would be a public record. Contracts like this are published each week in the agenda packet for city council meetings. But Visit Wichita feels it does not have to comply with simple transparency principles.

The City of Wichita could easily place conditions on the money it gives to these groups, requiring them to show taxpayers how their tax dollars are being spent. But the City does not do this. This is not transparency.

In the past I’ve argued that Visit Wichita is a public agency as defined in the Kansas Open Records Act. But the city disagreed. And astonishingly, the Sedgwick County District Attorney agreed with the city’s interpretation of the law.

So let’s talk about good public policy. Let’s recognize that even it is the case that the Kansas Open Records Act does not require Visit Wichita, WDDC, and GWEDC to disclose records, the law does not prohibit or prevent them from fulfilling requests for the types of records I’ve asked for. Even if the Sedgwick County District Attorney says that Visit Wichita is not required to release documents, the law does not prevent the release of these records.

Once we understand this, we’re left with these questions:

Why does Visit Wichita want to keep secret how it spends taxpayer money, as much as $5.5 million next year?

Why is this city council satisfied with this lack of disclosure of how taxpayer funds are spent? Many council members have spoken of how transparency is important. One said: “We must continue to be responsive to you. Building on our belief that government at all levels belongs to the people. We must continue our efforts that expand citizen engagement. … And we must provide transparency in all that we do.” That was Mayor Brewer speaking in his 2011 State of the City address.

The city’s official page for the current mayor holds this: “Mayor Longwell has championed many issues related to improving the community including government accountability, accessibility and transparency …”

In a column in the Wichita Business Journal, Wichita Mayor Jeff Longwell wrote: “First off, we want City Hall to be open and transparent to everyone in the community.”

Now is the chance to fulfill these promises. All the city needs to do is add to its contract with Visit Wichita that the agency agree that it is a public agency spending public dollars, and that it will comply with the Kansas Open Records Act.

It would be a simple matter for the council to declare that the city and its taxpayer-funded partner agencies believe in open government. All the city has to have is the will to do this. It takes nothing more. It costs the city and its agencies nothing, because the open records law lets government charge for filling records requests. I would ask, however, that in the spirit of open transparent government, in respect for citizens’ right to know how tax funds are spent, and as a way to atone for past misdeeds, that Visit Wichita fulfill records requests at no charge.