Wichita city leaders are telling us we need to spend a lot of money for a new water source. For some reason, debt has now become a dirty word.

Details are not firm (that’s a problem right there), but the amount needed is $250 million, city officials say. It could be less, they now speculate, maybe only $200 million.

To raise these funds, here’s the choice we’re given: Either (a) endure a sales tax for five years, or (b) borrow money, raise water bills for 20 years, and pay a lot of interest.

It’s a similar argument made in favor of a sales tax to pay for the Intrust Bank Arena in downtown Wichita. By paying higher sales tax for a short while, we avoid long-term debt.

There’s also the argument made that by using a sales tax, visitors to Wichita help pay for the water project. Of course, the sales tax is largely paid by local residents. My estimates indicate that raising the sales tax by one cent per dollar costs the average household $223 per year. That’s based on U.S. Census data of household spending in various categories, some subject to sales tax, and some not.

But even if we can get visitors to Wichita to pay part of the project’s cost through a sales tax, that’s not necessarily a wise course of action. By making it more expensive to visit Wichita, we make it a less desirable destination.

The motivation of those who argue for raising funds by getting outsiders to pay for our water project through a sales tax may be missing a subtle point. That is, much of what is “sold” in Wichita is not subject to sales tax, as the output of many manufacturers in Wichita isn’t taxed. The fuselages of Boeing 737 jetliners is an example. But these manufacturers use a lot of water and pay water bills. The cost of that they’ll probably pass on to their customers. 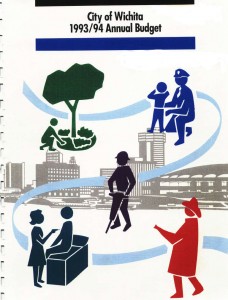 Of course, by making products manufactured in Wichita more expensive, we make them less desirable. There really is no free lunch, as the economists say.

All these arguments link the project with its funding too closely. They ought to be independent decisions.

What’s really curious is the city’s sudden aversion to debt. Almost all the money used to pay for the ASR to this point was borrowed. So far, the total cost of ASR is $247 million. It’s common to pay for long-lived capital assets with borrowed funds. So it’s strange for city council members to suddenly decide that debt is not good, and that we have to pay for this project with cash, which is what the sales tax does.

Here’s another alternative: If the project costs $250 million, let’s raise water bills by that amount over five years. In this way, water users pay for the new water supply, and we avoid the debt that city council members seem determined to avoid.

But it’s important to have water users pay for water. Also, we need to be aware of the costs of a new water supply. That’s easier to accomplish when people pay this cost through their water bills. When paying through a general sales tax, this linkage is less obvious. There is less transparency, and ultimately, less accountability.