Once again we see the Kansas public school establishment dodging the facts about Kansas school spending. An example from yesterday was provided by Kansas House of Representatives Minority Leader Paul Davis on his Facebook page. Here’s what he posted: 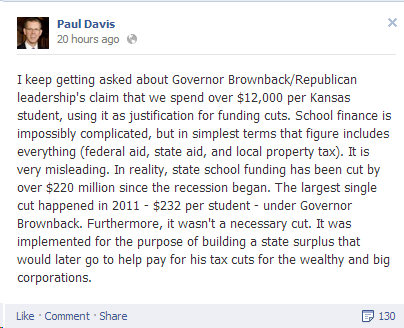 Rep. Davis, it’s not the governor that makes claims regarding the level of school spending in Kansas. The Kansas State Department of Education compiles and reports spending numbers. For those who can’t navigate the KSDE website to find spending numbers, I’ve provided them here, and also at the end of this article.

Rep. Davis may be referring to base state aid per pupil when making his argument. That number has fallen. But as you can see, total State of Kansas spending on schools has been rising after falling under a previous governor’s administration. Readers should also note that as Kansas state aid to schools fell, federal aid rose, almost making up the difference.

I would also remind the minority leader that tax cuts do not have a cost that needs to be paid for. It is government that has a cost. Reducing taxes lets people keep more of what is rightfully theirs, and that is always good.

Then: A reader left a comment wondering whether the school spending figures included mandatory KPERS payments. These are payments to the Kansas Public Employees Retirement System. These payments are part of the cost of having employees, as long as schools want to provide a retirement plan to their employees. Rep. Davis’ response is correct. The state sends funds to school districts, which the districts then send to KPERS. These funds, then, are included in total school spending figures.

Which is how it should be. How should the comment “it definitely doesn’t all go to classrooms” and Davis’ response be interpreted? The education spending establishment would like us to ignore that spending. But it’s money that’s spent. It’s part of the expense of having teachers. So does it go to the classroom? You be the judge.