Kansas Democrats are circulating a graphic that, while probably superficially accurate, fails to present the larger picture of Kansas school spending. 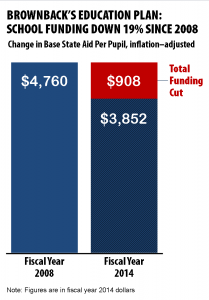 The chart claims that Kansas school funding is down 19 percent since 2008. This is after adjusting for inflation, which is a good thing to do when comparing amounts of money separated in time. The Democrats, however, make calculations based on the inflation rate in fiscal year 2014. Since fiscal year 2014 started just three weeks ago, we really don’t have any idea what the rate of inflation will be.

What the Kansas Democrats aren’t telling Kansans is this: Base state aid per pupil is just part of school spending, and most schools spend much more than that. Specifically, base state aid per pupil for the last school year was $3,780. But the state spent an average of $6,983 per pupil that year, which is an additional $3,203 or 84.7 percent more than base state aid. Overall spending from all sources was $12,656 per pupil. Both of the latter numbers are higher than the previous year.

It’s true that base state aid per pupil has declined in recent years. That’s a convenient fact for public school spending boosters. They can use a statistic that contains a grain of truth in order to whip up concern among the uninformed over inadequate school spending. They can cite this as an argument for increasing spending, even though spending has been rising.

Further, citing only base state aid reduces “sticker shock.” Most people are surprised to learn that our schools spend $12,656 per student. It’s much easier to tell taxpayers that only $3,780 was spent. But that’s not a complete picture. 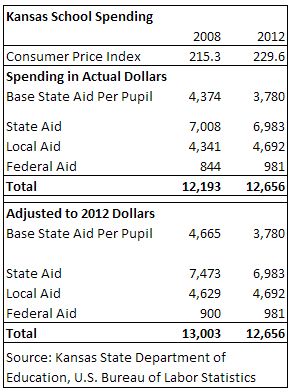 Here’s a table that shows the entirety of spending on public schools in Kansas. I use 2012 figures, as they are the most recent numbers that are available. (We know what base state aid per pupil is for next year, but actual spending depends on many factors that aren’t knowable in advance.)

I wonder: Why don’t Kansas Democrats tell you the whole story?