A Kansas public policy advocacy group makes an emotional pitch to petition signers, but signers should first be aware of actual facts.

To drum up support for its positions, Kansas Values Institute has started on online petition urging Kansas Governor Sam Brownback to veto HB 2506. Here’s the pitch made to potential petition signers:

“Governor Brownback has had four years to make schools a priority, but all he has to show for it is classrooms that are over crowded, parents paying rising school fees, and his signature achievement: the largest cut to classrooms in the history of Kansas. The Supreme Court’s ruling gave the Governor a chance to correct his course.”

Now, the governor has not necessarily been a friend of education, if by that we mean Kansas schoolchildren and parents. His lack of advocacy for school choice programs stands out from the progress that other Republican governors have made in their states. See The Year of School Choice and 2013: Yet Another ‘Year of School Choice.’

But we ought to hold public discourse like this to a certain standard, and the pitch made by Kansas Values Institute deserves examination.With regard to school funding, cuts were made by Brownback’s predecessors. Since he became governor, funding is pretty level, on a per student basis adjusted for inflation. It’s true that base state aid per pupil has declined due to the cuts made by governors before Brownback. But state and total funding has been steady since then.

Further, as can be seen in the nearby chart, there has been a steady increase in the ratios of state and total school spending to base state aid.

This is important, as the Kansas Supreme Court issued some instructions in the recent Gannon decision when it remanded part the case to the lower court. The Court said all funding sources are to be considered: “In the panel’s assessment, funds from all available resources, including grants and federal assistance, should be considered.” This will certainly test the faith in courts that school spending boosters have proclaimed.

So the claims of the present governor being responsible for “the largest cut to classrooms in the history of Kansas” is false.

Then, what about “classrooms that are over crowded”? Kansas State Department of Education has data on this topic, sort of. KSDE provides the number of employees in school districts and the number of students. I obtained and analyzed this data. I found that the situation is not the same in every school district. But considering the entire state, two trends emerge. For the past two years, the number of teachers employed in Kansas public schools has risen. Correspondingly, the pupil-teacher ratio has fallen. 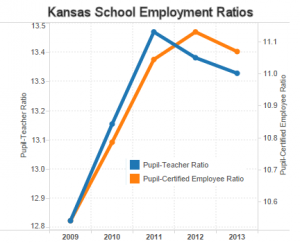 In its pitch, Kansas Values Institute complain that class sizes in Kansas schools are rising. The data that we have, which is the ratio of teachers to pupils, is not the same statistic as class size. They measure different things. But if Kansas schools, considered as a whole, have rising teacher and certified employment levels and the pupil to teacher ratio is decreasing, and at the same time class sizes are increasing — we have to wonder about the management of schools. What are schools doing with these new employees?

As far as I know, no one tracks school district fees across the state. I’d welcome learning of such data.

But regarding data we do have, we see that Kansas Values Institute is either not paying attention, or simply doesn’t care about truthfulness.