There is a claim that a recent change in the handling of KPERS payments falsely inflates school spending. The Kansas State Department of Education says otherwise.

A member of the Kansas State Board of Education has written an article that has received widespread attention. But the member, Jim Porter, is wrong on several accounts.

This is a standard argument of Kansas public school spending advocates, which is that because of a change in the way teacher retirement funds (KPERS contributions) are handled, it looks like the state is spending more on schools, when in fact it is not.

In response, Kansas Policy Institute noted this: “According to Dale Dennis, KPERS funding was last sent directly to KPERS in 2004; it has since been sent directly to school districts included in reported school funding totals.”2 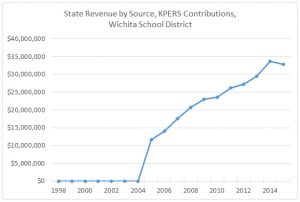 Even though Dennis is the state’s top education finance official, we don’t have to rely solely on him to illustrate Porter’s error. Information from the Wichita public school district3 shows the same. Here I’ve plotted the funding sent by the state of Kansas to USD 259 for KPERS contributions. As Dennis indicated, in 2005 the Wichita school district started receiving money from the state for KPERS. Prior to that year it received none.

Trabert’s article explains other ways in which Porter is wrong. I have to wonder what is the underlying reason for Porter writing things like this. Is he being told incorrect information or is he simply lying?