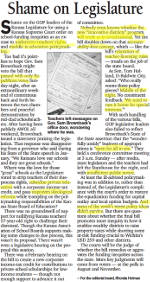 The Wichita Eagle editorial board, under the byline of Rhonda Holman, issued a stern rebuke to the Kansas Legislature for its passage of HB 2506 over the weekend. (Eagle editorial: Shame on Legislature, April 8, 2014)

Here are some notes on a few of Holman’s points.

She wrote that the legislature should not “undermine teachers’ rights and meddle in education policymaking.” First: There’s controversy over what the bill actually means to the relationship between teachers and their employers. Courts will probably have to intervene. Second: Should the Legislature have a say in policy, or just pay?

Then, she criticized the bill as “passed with only Republican votes” on a “Sunday night.” This reminded me of the passage of the Patient Protection and Affordable Care Act (Obamacare) in the United States Senate. At the time, The Hill reported: “The Senate approved sweeping healthcare reform legislation by the narrowest of partisan margins early Christmas Eve morning” (Senate passes historic healthcare reform legislation in 60-39 vote) That’s right: Votes from only one party, and on Christmas Eve.

Later in her op-ed Holman complained: “With such handling of the various bills, GOP legislative leaders also failed to reflect Brownback’s State of the State assertion that the ‘wonderfully untidy’ business of appropriations is ‘open for all to see.’ They held a conference committee meeting at 3 a.m. Sunday — after media, most legislators and the teachers had left the Statehouse for the night, and with insufficient public notice.” Reading this, I was again reminded of the passage of Obamacare, when Speaker Nancy Pelosi made her famous explanation as reported by Politico:

“You’ve heard about the controversies, the process about the bill .. but I don’t know if you’ve heard that it is legislation for the future — not just about health care for America, but about a healthier America,” she told the National Association of Counties annual legislative conference, which has drawn about 2,000 local officials to Washington. “But we have to pass the bill so that you can find out what is in it — away from the fog of the controversy.”

On the expansion of innovative districts, Holman wrote: “Nobody even knows whether the new ‘innovative districts’ program will work or is constitutional,” calling it an “accountability-free concept.” Well, we know that an important provision of the Patient Protection and Affordable Care Act (Obamacare) was ruled unconstitutional (the expansion of Medicaid), and Chief Justice John Roberts had to torture logic and the plain meaning of words in order to shoehorn the individual mandate into the Constitution.

I’m not saying that I approve of the way the Kansas Legislature approved this bill. But if it worked for Obamacare, and if Rhonda Holman and the Wichita Eagle editorial board like Obamacare (they do), well, you can draw your own conclusions.

Also, Holman complained of “unproven ideological reforms” contained in the Kansas school legislation. Two things: First, we know that the present system of public education in Kansas is not working for many children. For example, if we critically examine the National Assessment of Educational Progress test scores that Kansans are so proud of, we find that for some groups of students, the national public school average beats or ties Kansas.

Or, if we read the National Center for Education Statistics report Mapping State Proficiency Standards Onto the NAEP Scales, we can learn that Kansas has relatively low standards for its schools, and when Kansas was spending more on schools due to the Montoy decision from the Kansas Supreme Court, the state lowered the standards.

I’m of the opinion that whenever someone criticizes their opponents as ideological — as the Wichita Eagle editorial board has — they don’t have a very good argument. They’re likely confusing ideology with partisanship. The Wikipedia entry for ideology says: “An ideology is a set of conscious and unconscious ideas that constitute one’s goals, expectations, and actions. An ideology is a comprehensive vision, a way of looking at things. … Ideologies are systems of abstract thought applied to public matters and thus make this concept central to politics. Implicitly every political or economic tendency entails an ideology whether or not it is propounded as an explicit system of thought.”

I wish the Eagle editorial board was more ideological. If it firmly believed in economic freedom, free markets, limited government, and individual liberty — that’s an ideology we could live with, and Kansas schoolchildren could thrive under.

Instead, we’re left with the Wichita Eagle editorial board’s ideology of less educational freedom and less accountability to those who pay the bills and parent the students.