A proposed special tax district in Wichita holds the potential to harm consumers, the city’s reputation, and the business prospects of competitors. Besides, we shouldn’t let private parties use a government function for their exclusive benefit.

This week the Wichita City Council will consider the formation of a Community Improvement Districts to benefit a proposed hotel in west Wichita.

CIDs are a relatively recent creation of the Kansas Legislature. In a CID, merchants may charge additional sales tax, up to an extra two cents per dollar. For more about their mechanism, see Community improvement districts in Kansas. In the present case, the developer proposes to charge hotel guests an extra two cents per dollar in tax. If retail stores are developed, their customers will pay the CID tax too. This extra sales tax, minus a handling fee, will be periodically remitted to the developer.

One reason to oppose the formation of this CID is it contributes to Wichita’s reputation as a city of high taxes. The nearby table gives an example of what a hotel bill will look like. There’s the existing guest tax of 6 percent. The city started collecting the 2.75 percent “tourism fee” this year. 1 (How many cities charge visitors a fee for visiting?) There’s the combined state and county sales tax of 7.5 percent, and then the CID tax of 2 percent. The total of these taxes is 18.25 percent.The mayor and city council members note that these taxes are paid by people from out of town. They think it’s a smart strategy. But some significant fraction of these taxes are paid by Wichitans, particularly the many companies that have their scattered employees travel to Wichita. And, has anyone ever paid a hotel bill for visiting friends and relatives? 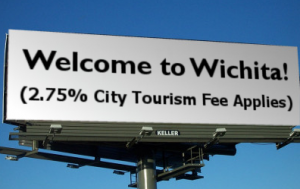 Besides this, do we really want to punish our guests with these taxes? A city tourism fee? Welcome to Wichita, indeed.

Another important public policy issue regarding CIDs is this: If merchants feel they need to collect additional revenue from their customers, why don’t they simply raise their prices? We can easily see their rationalization: It’s better for us that unwitting customers pay higher sales taxes rather than higher prices. We can blame government for the taxes, but we get the money. 2

There is the competitive effect on other hotels in the area to consider. Some hotel owners feel the ability of one hotel to collect the CID tax for its own benefit gives an unfair competitive advantage.

Customers of merchants in CIDS ought to know in advance that an extra tax is charged. Some have recommended warning signage that protects customers from unknowingly shopping in stores, restaurants, and hotels that will be adding extra sales tax to purchases. Developers who want to benefit from CID money say that merchants object to signage, fearing it will drive away customers.

State law is silent on this. The City of Wichita requires a sign indicating that CID financing made the project possible, with no hint that customers will pay additional tax. The city also maintains a website showing CIDs. This form of notification is so weak as to be meaningless, but this was the decision the city council made. 3

CIDs allow property owners to establish their own private taxing district for their exclusive benefit. This goes against the grain of the way taxes are usually thought of. Generally, we use taxation as a way to pay for services that everyone benefits from, and from which we can’t exclude people. An example would be police protection. Everyone benefits from being safe, and we can’t exclude people from participating in — benefiting from — police protection.

But CIDs allow taxes to be collected for the benefit of one specific entity. This goes against the principle of broad-based taxation to pay for an array of services for everyone. But in this case, the people who benefit from the CID are quite easy to identify: the property owners in the district. We shouldn’t let private parties use a government function for their exclusive benefit.