In December 2021, inflation remains high, although the rate of increase has slowed.

As measured by the Consumer Price Index, inflation remained high in December 2021, although the trend is falling.

The Consumer Price Index for All Urban Consumers (CPI-U) increased 0.5 percent in December on a seasonally adjusted basis after rising 0.8 percent in November, the U.S. Bureau of Labor Statistics reported today. Over the last 12 months, the all items index increased 7.0 percent before seasonal adjustment.

Increases in the indexes for shelter and for used cars and trucks were the largest contributors to the seasonally adjusted all items increase. The food index also contributed, although it increased less than in recent months, rising 0.5 percent in December. The energy index declined in December, ending a long series of increases; it fell 0.4 percent as the indexes for gasoline and natural gas both decreased.

The index for all items less food and energy rose 0.6 percent in December following a 0.5-percent increase in November. This was the sixth time in the last 9 months it has increased at least 0.5 percent. Along with the indexes for shelter and for used cars and trucks, the indexes for household furnishings and operations, apparel, new vehicles, and medical care all increased in December. As in November, the indexes for motor vehicle insurance and recreation were among the few to decline over the month.

The following examples from my visualization illustrate (click for larger versions): 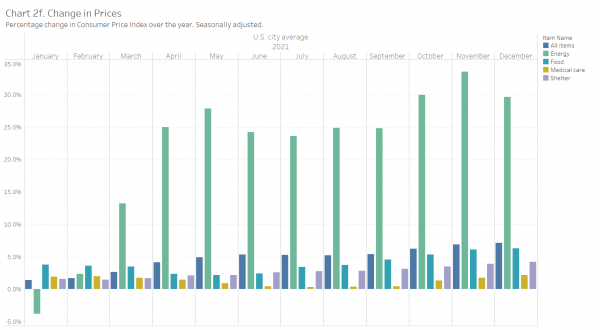 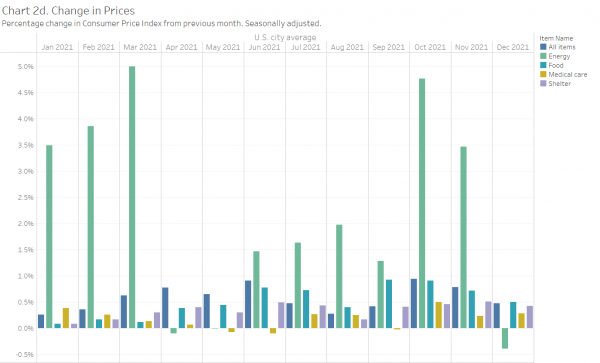 U.S. inflation hit its fastest pace in nearly four decades last year as pandemic-related supply and demand imbalances, along with stimulus intended to shore up the economy, pushed prices up at a 7% annual rate. …

The last time consumer prices clocked in at such an annual increase was in June 1982, but the circumstances were very different from today. While inflation right now is rising, back then it was falling after peaking at 14.8% in 1980, when Jimmy Carter was still president and the Iranian revolution had pushed up oil prices.

By then, newly installed Federal Reserve Chairman Paul Volcker had set out to crush inflation by raising interest rates dramatically, causing a brief recession in 1980. As rates reached 19% in 1981, a much deeper recession began. By the summer of 1982, both inflation and interest rates were falling sharply.

Today, the Covid-19 pandemic has caused supply-chain disruptions, and a shortage of goods and materials—particularly autos—coupled with strong demand from consumers flush with the benefits of government stimulus are behind the inflation surge. See U.S. Inflation Hit 7% in December, Fastest Pace Since 1982.

Inflation climbed to its highest level in 40 years at the end of 2021, a troubling development for President Biden and economic policymakers as rapid price gains erode consumer confidence and cast a shadow of uncertainty over the economy’s future.

The Consumer Price Index climbed 7 percent in the year through December, and 5.5 percent after stripping out volatile prices such as food and fuel. The last time the main inflation index eclipsed 7 percent was 1982.

Policymakers have spent months waiting for inflation to fade, hoping supply chain problems might ease and allow companies to catch up with booming consumer demand. Instead, continued waves of the coronavirus have locked down factories, and shipping companies have struggled to work through extended backlogs as consumers continue to buy foreign goods at a rapid clip. Forecasters expect price gains to fade this year, but how quickly that will happen is unclear, posing a big economic policy question for Mr. Biden and the Federal Reserve. See Consumer prices popped again in December, casting a shadow over the economy..

Of note, inflation is not the same for all items. The following chart shows some items that have risen at rates less than the overall rate over the past 11 years. Some have fallen significantly. 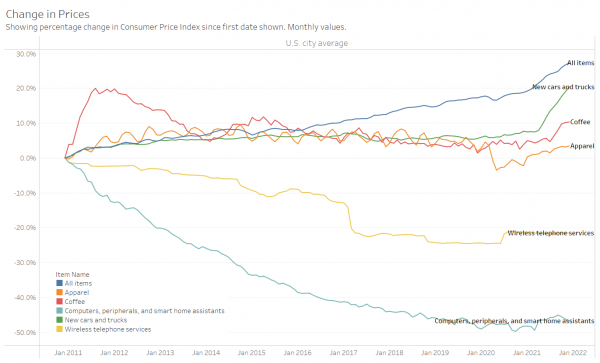 Also, inflation is not the same everywhere. The following chart shows the U.S. city average and the rates for large and medium Midwestern cities. 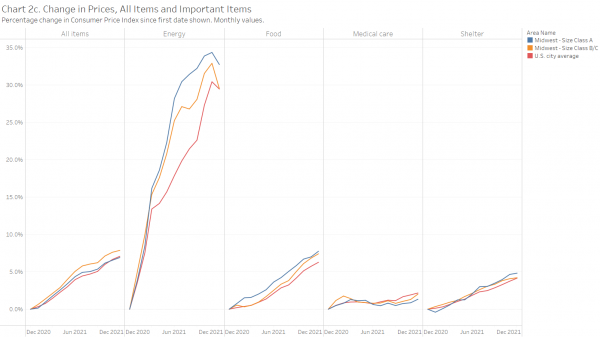