In the third quarter of 2020, the Kansas economy grew at the annual rate of 34.3 percent, compared to contraction of 30.6 percent in the previous quarter. GDP grew in all states, with Kansas performing in the middle.

In the third quarter of 2020, the Kansas economy grew at the annual rate of 34.3 percent in real (inflation-adjusted) dollars, according to statistics released today by Bureau of Economic Analysis, a division of the United States Department of Commerce. This large growth overcomes the contraction of 30.3 percent in the second quarter. This pattern of large growth in the third quarter after second-quarter contraction was shown in all states, to varying magnitudes.

GDP in Kansas for the quarter was at the annual rate of $175,465 million in current dollars, up from $161,464 the previous quarter. The third quarter consists of July, August, and September.

This the third quarter of data to be affected by the response to the pandemic, as BEA noted in the release accompanying the data:

The increase in third quarter GDP reflected continued efforts to reopen businesses and resume activities that were postponed or restricted due to COVID-19. The full economic effects of the COVID-19 pandemic cannot be quantified in the GDP estimate for the third quarter of 2020 because the impacts are generally embedded in source data and cannot be separately identified.

The Kansas rate of 34.3 percent ranked twenty-sixth among the states The national rate was 33.4 percent, with the rate for the Plains states at 35.0 percent. (For this data, BEA defines Plains states as Iowa, Kansas, Minnesota, Missouri, Nebraska, North Dakota, and South Dakota.)

Over the last eight quarters, Kansas has averaged quarterly growth rates of 0.8 percent in annual terms. For the nation, the rate was -0.9 percent. For the Plains states, it was 0.9 percent. 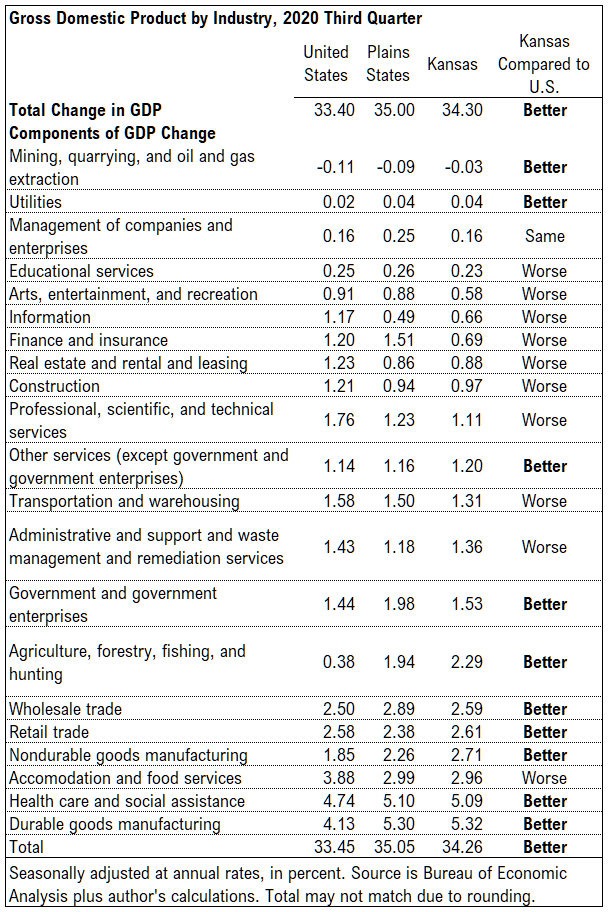 For the complete release at BEA, click on Gross Domestic Product by State, 3rd Quarter 2020.

I have developed an interactive visualization of this data over time. To access, click on Visualization: Quarterly Real Gross Domestic Product by state and industry.