In the fourth quarter of 2021, the Kansas economy expanded at the annual rate of 1.5 percent. Gross Domestic Product grew in 47 states, with Kansas ranking forty-sixth.

In the fourth quarter of 2021, the Kansas economy grew at the annual rate of 1.5 percent in real (inflation-adjusted) dollars, according to statistics released recently by Bureau of Economic Analysis, a division of the United States Department of Commerce. BEA says, “Gross domestic product (GDP) by state is the market value of goods and services produced by the labor and property located in a state. GDP by state is the state counterpart of the nation’s GDP, the Bureau’s featured and most comprehensive measure of U.S. economic activity.”

GDP in Kansas for the quarter was at the annual rate of $198,291 million in current dollars. The fourth quarter consists of October, November, and December. The Kansas rate of 1.5 percent ranked fortieth-sixth among the states. The national rate was 6.9 percent, while the rate for the Plains states was 2.2 percent. (For this data, BEA defines Plains states as Iowa, Kansas, Minnesota, Missouri, Nebraska, North Dakota, and South Dakota.) 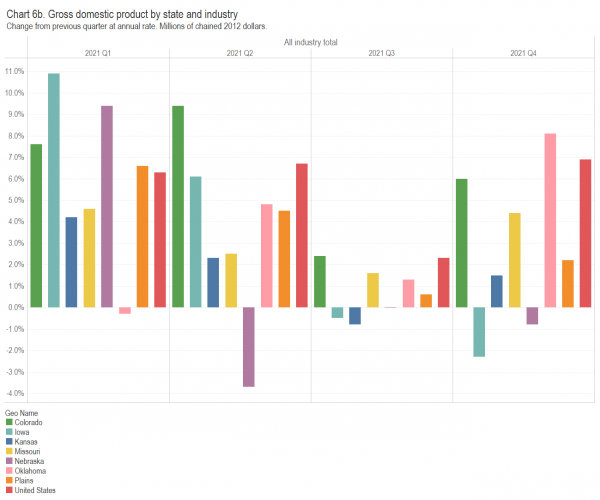 The fourth-quarter 2021 and 2021 annual estimates of GDP by state reflect the continued economic impacts related to the COVID-19 pandemic. The fourth-quarter estimates reflect an increase in COVID-19 cases resulting in continued restrictions and disruptions in the operations of establishments in some parts of the country. Government assistance payments in the form of forgivable loans to businesses and social benefits to households all decreased as provisions of several federal program expired or tapered off. The 2021 annual estimates reflect the continued economic recovery, reopening of establishments, and continued government response related to the COVID-19 pandemic. The full economic effects of the COVID-19 pandemic cannot be quantified in the GDP by state estimates because the impacts are generally embedded in source data and cannot be separately identified. 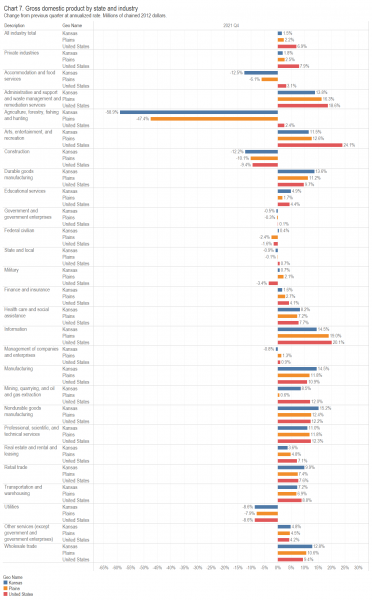 Chart 1a shows GDP change for selected industries and nearby states. This chart begins with the first quarter of 2020, which contains the pandemic’s start. Among nearby states, only Oklahoma fares worse than Kansas in total GDP growth. 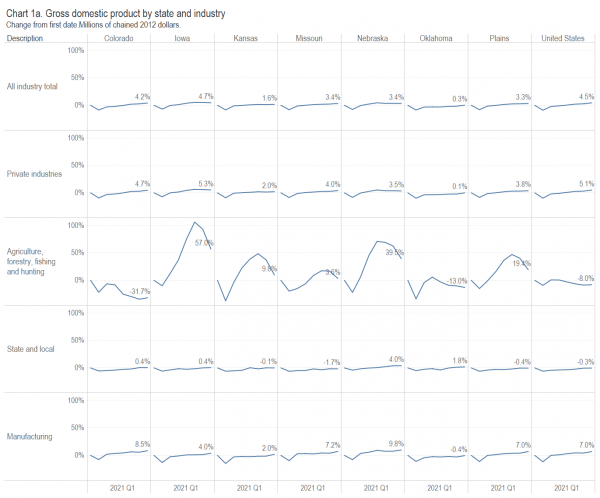 For the complete release at BEA, click on Gross Domestic Product by State, 4th Quarter 2021 and Year 2021 (Preliminary).

I have developed an interactive visualization of this data. To access, click on Visualization: Quarterly Real Gross Domestic Product by state and industry.