Cities and counties in Kansas may levy a transient guest tax on hotel guests. It is sometimes called a bed tax or guest tax. The tax is collected as a percentage of total room revenue, not the number of rooms or the rate charged for rooms. While the Kansas Department of Revenue collects the tax, the proceeds are returned to the cities or counties, except for a two percent processing fee. In Wichita, the tax rate is six percent.

In some cases, jurisdictions may levy additional taxes that may not be paid to the Kansas Department of Revenue. This is the case with the Wichita city tourism fee, which took effect on January 1, 2015. This tax of 2.75% is paid directly to the city, so it doesn’t appear in KDOR figures.

In the tables and charts, the effects of the response to the pandemic are notable. 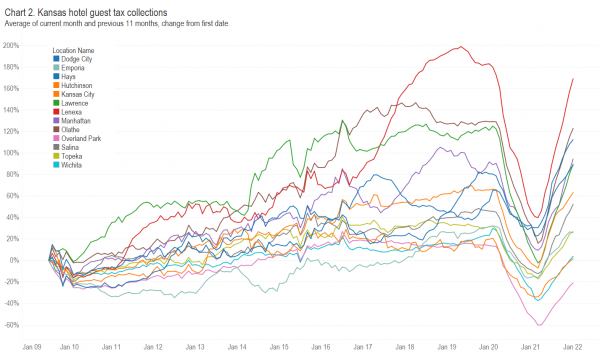