For May 2022, Kansas tax revenue was 13.6 percent less than May 2021. Collections through the first eleven months of the fiscal year are 9.7 percent greater than the prior year.

Tax reports from the State of Kansas for May 2022 show tax revenues falling from the previous month and also less than the same month the prior year. As April contains the main income tax deadline, the decline is not uncommon.

In its presentation of this data, Kansas Legislative Research noted this regarding retail sales tax collections: “The increase was primarily driven by the impact of inflation on prices.”

For fiscal year 2022, which started on July 1, 2021, total tax collections are higher by 9.7 percent over the same period of the previous fiscal year. Table 2 shows these figures.

Kansas tax revenues continue to outperform estimates. When the line is above zero in nearby chart 5a, actual revenue was greater than the estimate, and the line is nearly always positive for the past five years or so. Estimates are essential because the legislature uses them to make spending decisions. Beyond that, the variance between actual revenue and the estimate doesn’t have much meaning. The governor uses a positive variance as a sign of economic success, but this is incorrect. It just as easily means the estimates are wrong, possibly for reasons other than the inherent difficulties of making estimates. 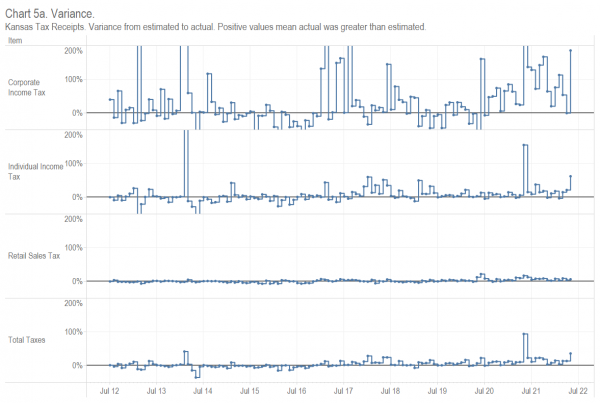 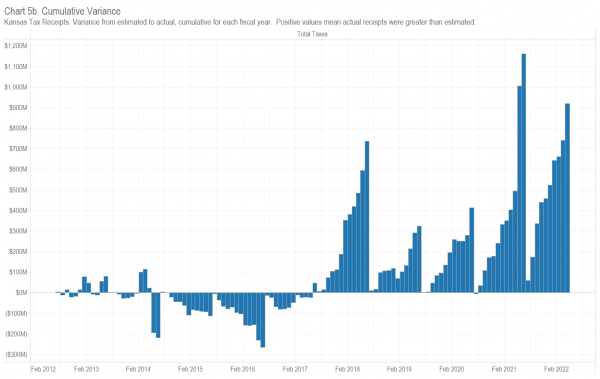 Of note, the report for May showed net transfers of negative $1,045,561,881, with negative meaning money was transferred out. This figure is not tax revenue collected or spent. Instead, it is money transferred from the general fund to other funds. For May 2022, there were two large transfers. One was caused by SB 421, which calls for transfers of $1.125 billion to KPERS, the state employee retirement fund. Of this, $553.9 million was transferred in May. The second transfer was part of House Sub. for Sub. for SB 267, which transferred $500.0 million to the Budget Stabilization Fund, which is the state’s rainy day fund. Together, these account for nearly all the value of net transfers for May.

The governor’s press release on this topic is here. The report from Kansas Legislative Research Department is available on this page. 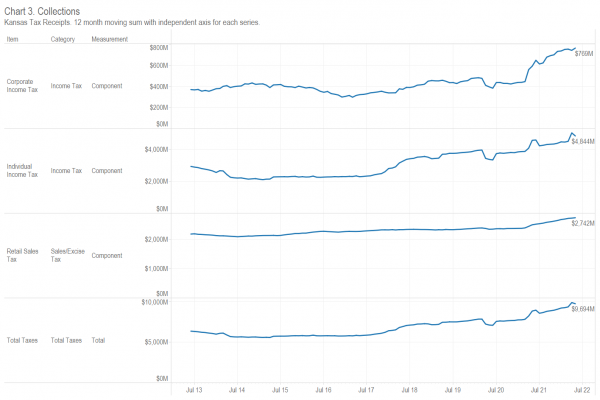