Back in the day

Was the America of a few generations ago preferable to today?

A post making the rounds on social media criticizes present-day America contrasted to a vaguely defined past. The post has received thousands of comments approving its sentiment, but much of the comparison is not justified. For example: “They are about to see why our parents/grandparents drove cars until the wheels fell off.”

There is data regarding this, gathered by the United States Bureau of Transportation Statistics and presented in a nearby table. (1)Average Age of Automobiles and Trucks in Operation in the United States. See https://www.bts.gov/content/average-age-automobiles-and-trucks-operation-united-states. In 1969 the average age of cars was 5.1 years. By 2017, it had increased to 10.1 years, meaning that people are driving cars much longer. (It isn’t clear what times the writer speaks of, but BTS has data starting in 1969. “Parents/grandparents” isn’t a very precise way to assign dates to history.) 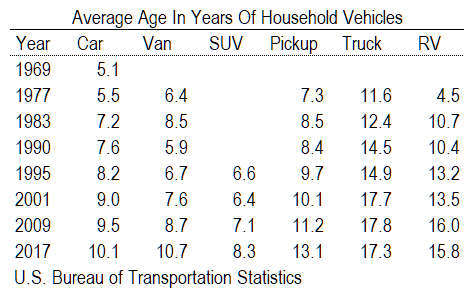 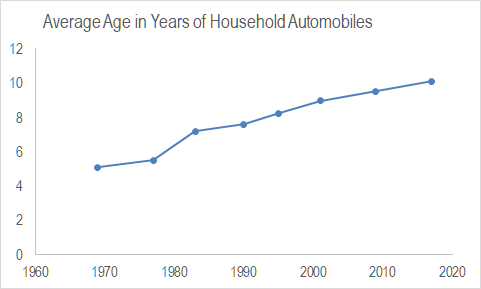 What about the cost of owning and operating cars? BTS has data for this, too. (2)Average Cost of Owning and Operating an Automobile. See https://www.bts.gov/content/average-cost-owning-and-operating-automobilea-assuming-15000-vehicle-miles-year. The nearby chart shows the total cost — purchasing, maintaining, and driving — adjusted for inflation. Over time, the cost changes little, even showing a slight downward trend. 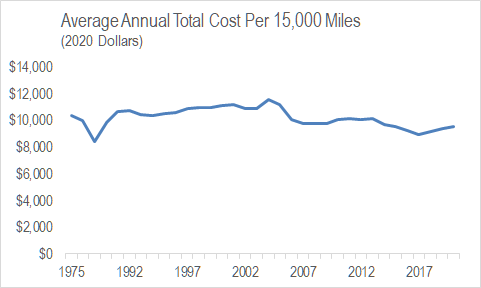 Further, cars are so much safer today. Other data from BTS reports that in 1960, there were 5.06 fatalities per 100 million vehicle-miles. By 2020, that rate had fallen to 1.34, meaning you were 3.8 times more likely to die for every mile driven in 1960. (3)Motor Vehicle Safety Data. See https://www.bts.gov/content/motor-vehicle-safety-data. Then, the comfort of today’s cars — air conditioning, sound systems, etc. — is much better than in the past.

Overall, in an attempt to generate enthusiasm for an America of the past, the author — inadvertently, I presume — shows us how far we have advanced.

For example, the writer tells us that people rarely ate at restaurants because they prepared meals at home. There is data on this topic going back to 1960. (Part of the problem in examining this article is the ambiguity of the time periods referenced.) A nearby chart presents data published by the United States Department of Agriculture. It shows the portion of disposable personal income spent on food, both at home and away from home. (4)Budget share for total food dropped by 10 percent in 2020, a new historical low, at https://www.ers.usda.gov/data-products/chart-gallery/gallery/chart-detail/?chartId=76967. 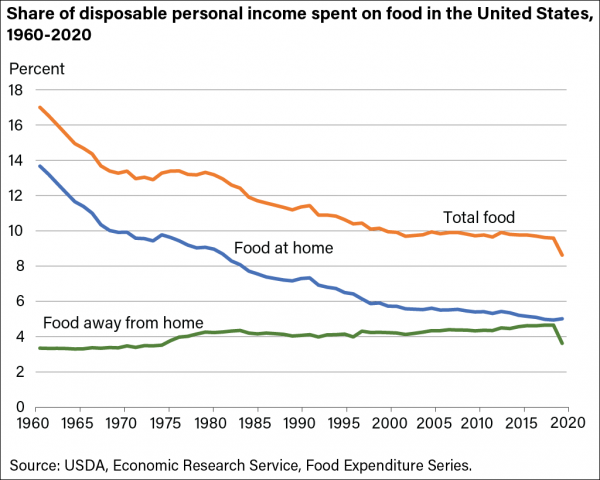 The most remarkable finding from this chart is that we are spending less of our income on food. Much less. As to the claim that people rarely ate at restaurants, the portion of income spent on food away from home has increased, but slightly and slowly.

Dining in restaurants and bringing home takeout is an advancement in the standard of living. Imagine: Being able to afford to pay others to cook delicious food for you. This is great!

On top of this, think of the tremendous variety of food that is available today. We have “foodies” — people who explore and relish the variety of food and cooking as an interest and hobby.

We are all about to have a rude awakening. Some of us are old enough to remember the past. The younger generation has been so spoiled by the goodness of living in the USA, that they have no idea what is coming.
They are about to see why our parents/grandparents drove cars until the wheels fell off. And why it was typical to have one car per family. And why young newlyweds weren’t automatically entitled to a fully furnished house. Or lavish wedding (Do y’all remember when a wedding reception typically occurred in the fellowship hall of the church? And the only food was wedding cake, mints, mixed nuts and punch?) A honeymoon might include a night at a hotel, or if they were really lucky they might get a weekend in Hot Springs, Arkansas.
There weren’t restaurants on every corner, because people only RARELY ate out. They cooked every meal at home. Or packed a lunch for the road. And they never wasted leftovers. Picky eaters? You either ate what your Mama cooked or you did without. AND NO ONE CARED. We are about to rediscover potato patties, soup, hash, biscuit pudding, rice pudding, cornbread in milk, and bread with gravy. NO FOOD WAS WASTED.
People had few outfits. Hand-me-downs were common. You had church clothes and play clothes. And you took care of those clothes. Holes were mended and it didn’t matter if you liked the clothes or not. You wore what you had.
And people didn’t snack or eat all day long either. People were rarely overweight. Because they didn’t have an unlimited supply of food at their fingertips. And water came out of the faucet or water hose. Cold water came from a water jug that was kept in the refrigerator.
People weren’t being constantly entertained. Kids played outside and made up games with their imaginations. No fancy vacations. There was no money for all these extras that we consider “Rights”.
Maybe people will finally wake up and realize that it is a PRIVILEGE to be an American. And feel gratitude and quit being such entitled whiney babies.
People shed blood and died to give us this life.
AND WE ARE STARTING TO PROVE THAT WE DON’T DESERVE IT.