A popular Facebook post is often introduced like this: “Here’s some comments from a man who knows why we’re seeing those rising cost.” It claims to be “Written by BP Oil Executive Brice Cromwell.”

Several fact checking sites have reported findings similar to this: “There is no record of any BP executive making such a statement. A spokesperson for BP confirmed there is no Brice Cromwell working for the company and that the text did not originate with anyone from the company.” In other words, this post makes an appeal to authority, but the authority is nonexistent.

If there was a Brice Cromwell, he probably wouldn’t want his name and reputation associated with this post, as there are some glaring factual errors. The post claims that under President Trump, “Your 401K was higher.” While 401k accounts can be invested in many things, a popular investment is an index fund based on the Standard & Poor’s 500 index. In January 2021, the index was around 3,800. Today, around 4,100.

Another very popular 401k investment is Vanguard Institutional Index Fund Institutional Shares, or VINIX. On January 1, 2021, its value was 328.12. Today, it is 349.68. So for most people, their IRA is worth more now, directly contradicting this claim.

Another argument made in this post is that under President Trump, “we were booming as a country.” No doubt the economy grew while Trump was president. He was successful in maintaining the trend that was in place when he took office.

But the growth ended, and the economy slipped into recession.

The National Bureau of Economic Research conducts research regarding the business cycle. It is the most widely-used source of dates of recessions and expansions. According to its table US Business Cycle Expansions and Contractions, the United States entered into recession in February 2020, with the peak economic output in the fourth quarter of 2019.

There are many political claims in this article, such as “Now after a year of our current admin, you’ll realize that these people are ‘not for the people.'” These are opinions. But some of the facts in this post are definitely wrong. 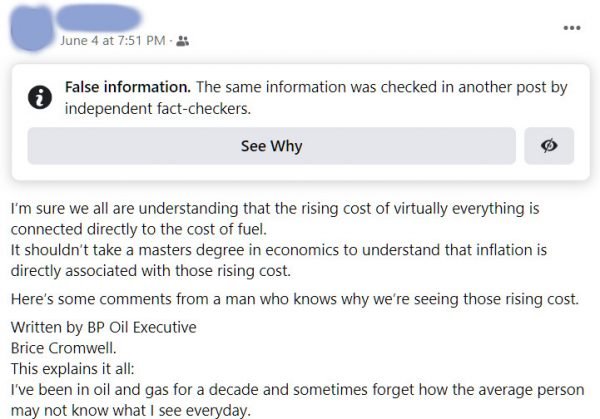