The City of Wichita should not approve a measure that is not needed, that does not conform to the city’s policy (based on relevant information not disclosed to citizens), and which is steeped in cronyism.

In most cases, the major benefit of IRBs is exemption from paying property taxes. Since the Ambassador Hotel is located within a tax increment financing (TIF) district, it’s not eligible for property tax abatement. (Because of the TIF, the developers have already achieved the diversion of the majority of their property tax payments away from the public treasury for their own benefit.)

Instead, in this case the benefit of the IRBs, according to city documents, is an estimated $703,017 in sales tax that the hotel won’t have to pay.

The Ambassador Hotel has benefited from many millions of taxpayer subsidy, both direct and indirect. So it’s a good question as to whether the hotel deserves another $703,017 from taxpayers.

But if we follow the city’s economic development policy, the city should not authorize the IRBs. Here’s why.

The policy also states that if the 1.3 to one threshold is not met, the incentive could nonetheless be granted if two of three mitigating factors are found to apply. But there is a limit, according to the policy: “Regardless of mitigating factors, the ratio cannot be less than 1.0:1.”

In September 2011 the city council passed a multi-layer incentive package for Douglas Place, now better known as the Ambassador Hotel and Block One. Here’s what the material accompanying the letter of intent that the council passed on August 9, 2011 held: “As part of the evaluation team process, the WSU Center for Economic Development and Business Research studied the fiscal impact of the Douglas Place project on the City’s General Fund, taking into account the requested incentives and the direct, indirect and induced generation of new tax revenue. The study shows a ratio of benefits to costs for the City’s General Fund of 2.62 to one.”

The same 2.62 to one ratio is cited as a positive factor in the material prepared by the city for Tuesday’s meeting.

So far, so good. 2.62 is greater than the 1.3 that city policy requires. But the policy applies to both the general fund and the debt service fund. So what is the impact to the debt service fund? Here’s the complete story from the WSU CEDBR report (the report may be viewed at Wichita State University Center for Economic Development and Business Research Study of Ambassador Hotel):

We can see that the impact on the debt service fund is negative, and the impact in total is negative. (A cost-benefit ratio of less than one is “negative.”)

Furthermore, the cost of the Ambassador Hotel subsidy program to the general fund is $290,895, while the cost to the debt service fund is $7,077,831 — a cost factor 23 times as large. That’s why even though the general fund impact is positive, the negative impact of the much larger debt service fund cost causes the overall impact to be unfavorable.

The city didn’t make this negative information available to the public in 2011, and it isn’t making it available now. It was made public only after I requested the report from WSU CEDBR. It is not known whether council members were aware of this information when they voted in 2011.

So the matter before the council this week doesn’t meet the city’s economic development policy standards. It’s not even close.

There are, however, other factors that may allow the city to grant an incentive: “In addition to the above provisions, the City Council and/or County Commission may consider the following information when deciding whether to approve an incentive.” A list of 12 factors follows, some so open-ended that the city can find a way to approve almost any incentive it wants.

A note: The policy cited above was passed in August 2012, after the Ambassador Hotel incentives package passed. But the 1.3 to one threshold was de facto policy before then, and whether a proposed incentive package met that standard was often a concern for council members, according to meeting minutes.

Citizens might wonder why industrial revenue bonds are being issued for a hotel that’s complete and has been operating for over three months. The truly cynical might wonder why this matter is being handled just two weeks after the city’s general election on April 2, in which four city council positions were on the ballot. Would citizens disagree with giving a hotel $703,017 in sales tax forgiveness? Would that have an effect on the election? 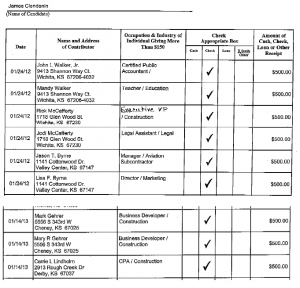 Campaign contributions received by James Clendinin from parties associated with Key Construction. Clendenin will vote tomorrow whether to grant sales tax forgiveness worth $703,017 to some of these donors. (Click for larger view.)

Combine this timing with the practice of part of the hotel’s ownership team of engaging in cronyism at the highest level. Dave Burk and the principals and executives of Key Construction have a history of making campaign contributions to almost all city council candidates. Then the council rewards them with overpriced no-bid contracts, sweetheart lease deals, tax abatements, rebates of taxes their customers pay, and other benefits. The largesse dished out for the Ambassador Hotel is detailed here. This hotel, however, was not the first — or the last time — these parties have benefited from council action. 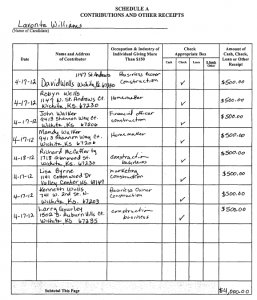 Campaign contributions received by Lavonta Williams from parties associated with Key Construction. Williams will vote tomorrow whether to grant sales tax forgiveness worth $703,017 to some of these donors. (Click for larger view.)

Campaign finance reports filed by two incumbent candidates illustrate the lengths to which Key Construction seeks to influence council members. Wichita City Council Member James Clendenin (district 3, southeast and south Wichita) and Wichita City Council Member Lavonta Williams (district 1, northeast Wichita) received a total of $7,000 from Key Construction affiliates in 2012. Williams received $4,000, and $3,000 went to Clendenin. For Williams, these were the only contributions she received in 2012.

A table of campaign contributions received by city council members and the mayor from those associated with the Ambassador Hotel is available here.

This environment calls out for campaign finance reform, in particular laws that would prohibit what appears to be the practice of pay-to-play at Wichita City Hall.

There was a time when newspapers crusaded against this type of governance. Unfortunately for Wichitans, the Wichita Eagle doesn’t report very often on this issue, and the editorial board is almost totally silent. Television and radio news outlets don’t cover this type of issue. It’s left to someone else to speak out.