Have you suspected that the country has become more partisan? An index supports that.

The Federal Reserve Bank of Philadelphia produces a monthly index that measures one aspect of political partisanship. The authors explain:

The Partisan Conflict Index tracks the degree of political disagreement among U.S. politicians at the federal level by measuring the frequency of newspaper articles reporting disagreement in a given month. Higher index values indicate greater conflict among political parties, Congress, and the President.

The index is an outgrowth of recent Federal Reserve Bank of Philadelphia research that finds that the index tends to increase near elections and during debates over such contentious policies as the debt ceiling and health-care reform. Research suggests that increased partisan conflict increases uncertainty among firms and households. Such uncertainty has been shown to slow economic activity by delaying business investment and consumer spending.

The source of the data that comprises the index is “the frequency of newspaper articles that report lawmakers’ disagreement about policy,” according to a research paper by the author. (See Azzimonti, Marina (2014), “Partisan Conflict,” Federal Reserve Bank of Philadelphia Working Paper 14-19.” Available at link below.)

Here is a graph of its index from its inception in 1981 to its most recent value in August 2020. As you can see, for nearly three decades the index hovered around or below the value of 100. 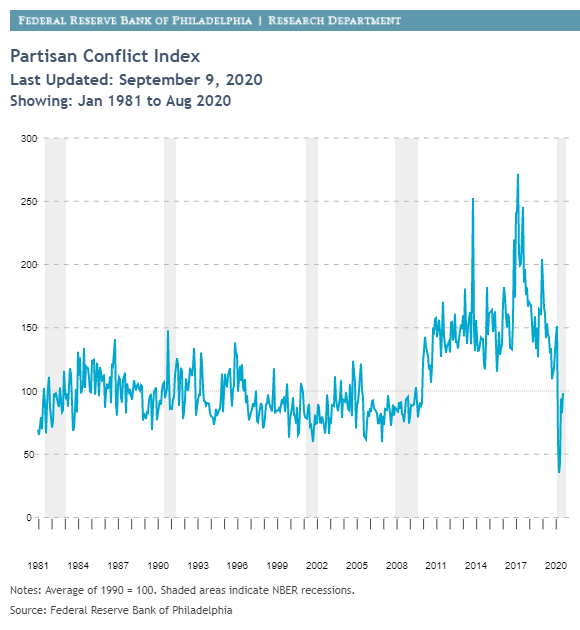 Then, in 2009, after the election of Barack Obama, the index started rising, indicating greater political disagreement. It meandered in an upward direction, reaching a local peak in October 2013 at the time of a 16-day federal government shutdown.

After that, the index returned to its previous range but rising sharply in November 2016, where there was a presidential election. It continued to rise, reaching its all-time high in March 2017, two months after Donald Trump took office.

From there, it mostly meandered downward, except for a peak in January 2019. The index reached its all-time lowest value in April 2020 as the nation grappled with the effects of the COVID-19 pandemic. While the nation was not at war (except for Afghanistan), the national mood was similar to wartime. As the author of the index has noted: “The lower-than-average values observed during wars suggest a ‘rally around the flag’ effect.”

In May and June, however, the index rose, perhaps as controversies surrounding the pandemic and the federal government’s response arose. 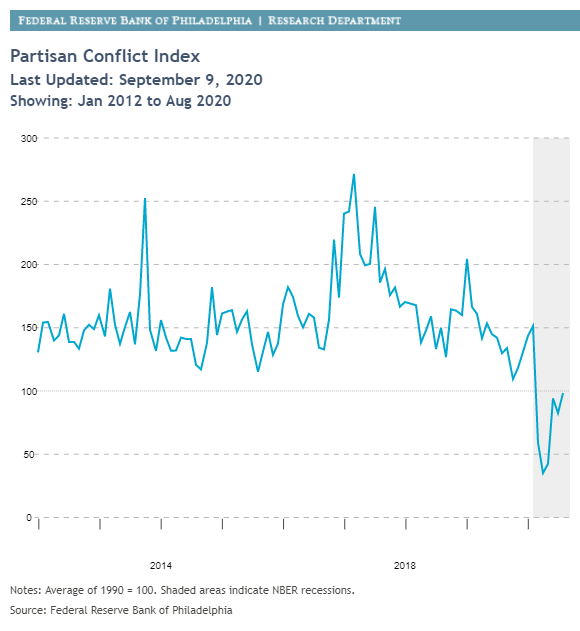 For more information on the index and to use an interactive version of the chart examples shown here, see Partisan Conflict Index.