The Douglas Design District seeks to transform from a voluntary business organization to a tax-funded branch of government.

Who will collect, and who will spend? “While the City levies the service fee, it can contract with a third-party organization such as the DDD to operate the BID. The approach is similar to that used by the City to contract with the Wichita Downtown Development Corporation in downtown.”

All this is repeated in the agenda packet for this week’s meeting. 2 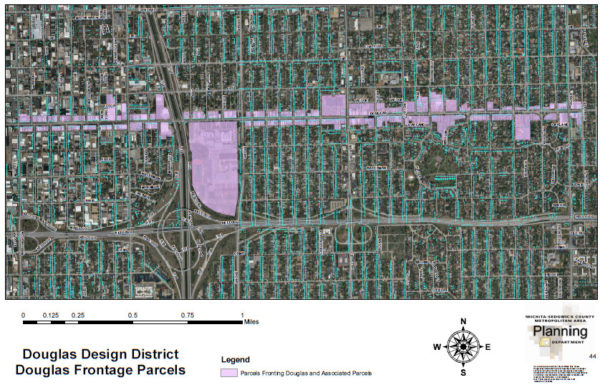 The action on the agenda this week finalizes the district’s funding mechanism: “The annual fee ranges from $100 to $550 depending on the size of the business and is anticipated to generate approximately $50,000 a year.” By size, the city means the number of square feet. If a business or property owner does not pay, the city may start collection activity, although what that means is unspecified: “If any delinquent Fee or penalty is not paid within sixty (60) days from the date on which the Fee or penalty became delinquent, the City may give notice to the business of its intention to initiate a collection action.”

Are BIDs a good idea? Most information about them is provided by their boosters, that is, those who directly benefit from the service fee, which is really a tax. But there are some doubters. The New Republic, by no means a conservative publication, printed a piece arguing against BIDs, stating: “But too often BIDs have turned against the businesses they were meant to serve, making the cost of entry into a new area even higher for local merchants, or lacking the transparency needed to instill trust from the community.” 3

A larger and more balanced look at BIDs comes from Washington Monthly in 2018:

The privatized structure of BIDs may raise liberals’ hackles, but it’s clear that BIDs can be a useful tool to remake neighborhoods into places where people actually want to spend their time. Many big-city mayors — who are overwhelmingly Democratic — have thrown their weight behind them. D.C. Mayor Muriel Bowser recently doled out grants totaling $300,000 to five neighborhoods thinking about forming their own BIDs. (One of the grantees, Dupont Circle, with the decaying park, will start collecting taxes from business owners in the fall.)

Still, there are real downsides to BIDs for renters and small business owners, who will not benefit from rising property values and may ultimately be pushed out of the area. Luckily, this isn’t a hugely difficult problem to remedy. The best, and easiest, way to revamp how BIDs are run is through city halls; they’re the ones who legislate what BIDs can and can’t do, while holding them accountable to the public. But too often, they renege on that responsibility. 4

In this paper, we propose and develop the concept of “socio-economic hygiene” to denote the ways in which neoliberal Western urban space is spatially regulated and re-oriented towards consumption in a way that reinforces social exclusion. … We conclude by tracking how sociological strategies of “hygiene” have moved from racial and biological features to features of place and socioeconomic status, and how BIDs, resembling genocidal states in certain ways, use these strategies to continually justify their own existence. 5

What should trouble everyone is the replacement of civil society with political society. Edward H. Crane explains: “There are basically only two ways to organize society: Coercively, through government mandates, or voluntarily, through the private interaction of individuals and associations. … In a civil society, you make the choices about your life. In a political society, someone else makes those choices.”

Right now DDD is a voluntary organization. Civil society, in other words. But now it is proposed to replace it with political society.

Why trade voluntary cooperation for the force of government? The annual report of the DDD (included in the city council agenda packet in 2018) explains: “Approximately 1/3 of businesses in DDD’s project area are DDD members yet ALL businesses benefit from DDD’s efforts. A BID eliminates this ‘free rider’ problem and, if implemented, would allow DDD to have a singular focus on implementing the BID business plan rather than always chasing membership.” For emphasis, the report notes: “THE PAYMENT OF THE BID ASSESSMENT WILL REPLACE MEMBERSHIP DUES.”

Another term for chasing membership is selling your product by showing how it creates value. If the formation of the BID is successful, the Douglas Design District will be relieved of this necessity. Will having a guaranteed source of revenue make DDD more or less responsive to its members?

Also, the DDD annual report states: “A BID assessment is not a tax.” But for those who decide to skip paying this tax? After a few years, they will experience the blunt power of government tax collection.

The agenda packet states this about the relationship between the city and the district: “While the City levies the service fee, it can contract with a third-party organization such as the DDD to operate the BID.”

Wichita has similar organizations. One is the Wichita Downtown Development Corporation, now known as Downtown Wichita. This organization is funded nearly entirely by tax revenue from an improvement district. Yet, it refuses to make its spending records public, and the city supports that decision. 6

Another similar taxpayer-funded organization is the city’s convention and tourism bureau, which has gone by several names over the years. Regarding it, in 2012 I wrote:

We’ve learned that city council members rely on — as Randy Brown told the council last year — facile legal reasoning to avoid oversight: “It may not be the obligation of the City of Wichita to enforce the Kansas Open Records Act legally, but certainly morally you guys have that obligation. To keep something cloudy when it should be transparent I think is foolishness on the part of any public body, and a slap in the face of the citizens of Kansas. By every definition that we’ve discovered, organizations such as Go Wichita are subject to the Kansas Open Records Act.” 7

Of interest is a segment from the KAKE Television public affairs program “This Week in Kansas” where the failure of the Wichita City Council, especially council member Pete Meitzner (district 2, east Wichita), to recognize the value of open records and open government is discussed. Video is here.

Since this time, the city has formed a business improvement district known as a TBID. It covers all hotels in the city and imposes an additional 2.75 percent tax to hotel bills, although the city and hotels call it a “City Tourism Fee.” 8 I’ve not asked for records of this spending, but I am sure the request would be rejected.

Will the Douglas Design District follow the standard set by Wichita’s other improvement districts and evade accountability and transparency?

The Washington Monthly piece mentions that city halls can hold BIDs accountable. But lack of transparency works against oversight and accountability.

Then, if anyone wonders what about the results of Wichita’s improvement districts, here are a few findings:

Despite this record, Wichita City Hall seems satisfied with these results.