Wichita government spending on economic development leads to imagined problems that require government intervention and more taxpayer contribution to resolve. The cycle of organic rebirth of cities is then replaced with bureaucratic management. 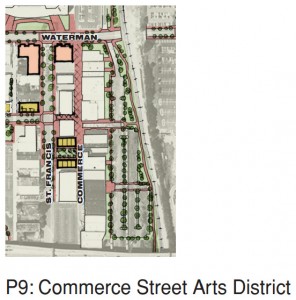 As the City of Wichita prepares its legislative agenda for 2015, an issue arises for the first year. It seems that the success of government spending on development has created rising property values, which creates higher tax bills, and that is a burden for some. Here’s the issue the city has identified: “Cultural arts enterprises in certain areas are threatened by rising property values and the resulting tax burden.”

Here’s the solution the city proposes: “The Wichita City Council supports state legislation that would allow local governments to use innovative measures to protect cultural arts enterprises from circumstantial increases in property taxes. The intent is to nurture and preserve arts activity throughout the City of Wichita and the State of Kansas.”

What are the “innovative measures” the city wants to use? Nothing special; just allowing a special group of people to shirk paying the same taxes that everyone else has to pay. The city wants to be able to use tax abatements for up to ten years. The percentage of taxes that could be forgiven could be as high as 80 percent.

So there’s really nothing innovative to see here. The city merely wants to broaden the application of tax forgiveness. Which means the tax base shrinks, and the people who still find themselves unlucky enough to still be part of the tax base face increasing demands for their tax payments.

The city manager said that artists from Commerce Street came to the city looking for a solution to their problem. Which is about the same problem that everyone else has: high taxes.

Here’s the nub of the problem, as explained by the city manager: “The more successful that we are with the redevelopment, the higher the value of the properties, and therefore harder for them who are on thin margins to begin with to stay in the districts, so they lose their charm of being the artistic or art districts.”

The proposed solution, which will require a change to state law, is that a government bureaucrat will decide the boundaries of one or more cultural arts districts. The bureaucrat will also decide which types of business firms qualify for discounts on their taxes. Besides Commerce Street, the manager identified Delano, Old Town, and the Douglas Design District as possible districts where artists might receive 80 percent discounts on their property taxes.

After this, other taxpayers have to make up the lost tax revenue from the artists. That is, unless the city decides to reduce spending by the amount of the tax discounts. I’ve proposed that to the city in other similar circumstances, and the idea was rejected. I believe council members thought I was delusional.

There are many people and business firms that operate on the same “thin margins” that the city manager wants to help artists escape. We see them come to city hall seeking special treatment. As a result, the city plans and manages an increasing share of the economy, and economic freedom, entrepreneurship, and the potential for a truly dynamic economy decline.

Who will stake out the next frontier?

There are many problems with the idea the city is proposing.

One is that the city is asking poor people to pay their full share of property taxes while granting artists a discount. This is a serious problem of equity, which is that people in similar circumstances should be treated the same. Just because someone chooses art as a business or vocation doesn’t mean they should be treated specially with respect to the taxes they pay.

Another problem is that the process of establishing arts districts will interrupt the dynamism of the way cities develop. Arts districts develop because artists want (or need) places with cheap rent. Unless they can persuade city hall to grant property tax discounts, this generally means artists rent space in “bad” parts of town, that is, parts of town that are run down, blighted, and may have high crime rates. Thus, cheap rent.

If things go well, that is, the artists are successful and a community develops, things get fixed up. Rents rise. Taxes rise. The artists can’t afford the higher rent and taxes and have to move on. Which means the cycle repeats. The artists on the cutting edge find other places to move to, and the cycle repeats. Other parts of the city are reborn — organically — through the benefits of markets, not government bureaucracy. This is good.

Except: The City of Wichita is proposing to end the cycle by granting discounts on taxes to artists so they may remain where they are.

We replace dynamism with stagnation by bureaucracy. The city says this is innovative.