Despite heavy promotion and investment in downtown Wichita, the number of jobs continues to decline.

Data is available by zipcode. This allows isolation of downtown Wichita, which usually recognized as zip code 67202. Data was released at the end of August for calendar year 2017.

What does the data tell us about downtown Wichita? As can be seen in the nearby chart, the trend in jobs is down, and down almost every year. Most notably, the number of private sector jobs has declined by 28.6 percent since 2002. (Click charts for larger versions.)

Since 2010, about the time Wichita started more aggressive promotion of downtown, the number of private sector jobs has fallen by 9.4 percent.

Of note, for the three age groups this data tracks, the jobs in group “age 55 or over” is growing, although it is numerically the smallest group.

The City of Wichita and the Wichita Metropolitan Statistical Area are not doing well. According to the same data set, the rate of job growth has been declining since 2012, and was near zero or negative for 2016 and 2017. 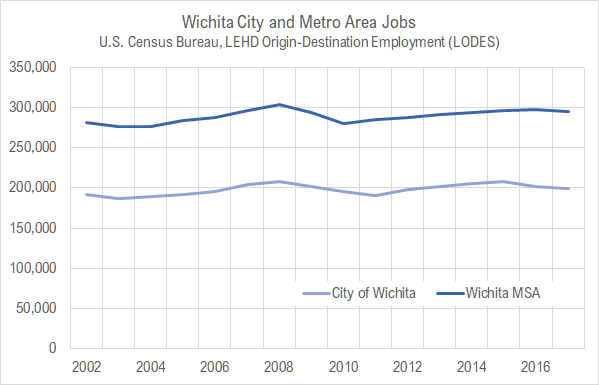 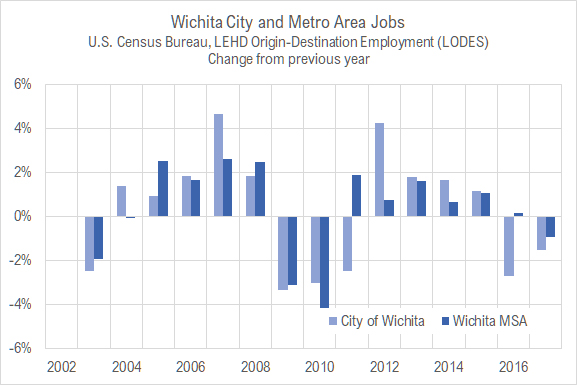 For more information on this data, and to access the interactive visualization of this data, see Visualization: Downtown Wichita jobs.

Because of the public policy aspect of this data, I asked both candidates for Wichita Mayor for a response. Wichita Mayor Jeff Longwell did not respond to repeated requests. Challenger Brandon Whipple provided this by email:

Wichita has competed and beat our sister cities in the past economically. We need leaders who are not afraid to compare Wichita not only to our past, but also to other mid-size cities and have the vision to again become an economic leader among them. There is no silver bullet but the first step towards economic growth is recognizing we have room to grow.

Also we’re not gaining jobs, we’re losing people. That’s nothing to brag about.

Based on how the Census Bureau collects LEHD data it can be difficult to get a true comparison of year-to-year numbers especially in smaller geographic areas. Our understanding is that how a company reports its workers can vary and that the Census Bureau gives data in each category what they call a “noise infusion” to protect individual firms’ confidentiality. When we have talked with economic groups such as WSU’s CEDBR, they consider the LEHD data the best data available while also recognizing these issues.

While these concerns about LEHD data are valid, I don’t believe they explain the long-term trend. Additionally, both the city, its agencies, and WSU’s CEBDR have made gross errors in using LEHD data. 1 2