Comments by two Wichita city council members give citizens more reasons to be cynical and distrusting of politicians.

In a recent Facebook post that someone sent to me, Wichita City Council Member Pete Meitzner (district 2, east Wichita) wrote: “Hmmmm…..of note; Wichita is the only sizable city in Kansas that does not ADD any sales tax on top of the State and Sedgwick County sales tax rate.” 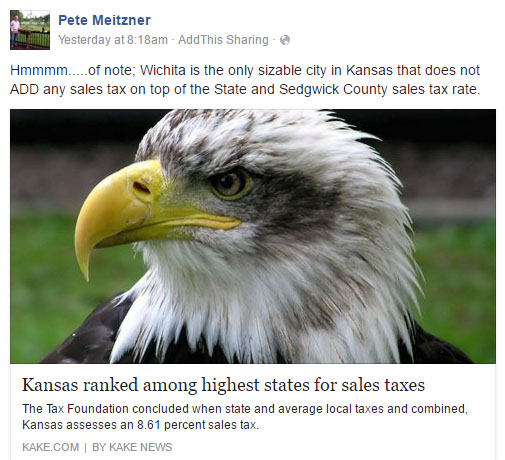 It is astonishing that council member Meitzner would brag of this — that Wichita has no city sales tax. That’s because Meitzner, along with all council members but one, voted to place the sales tax measure on the November 2014 ballot. Wichita voters rejected that sales tax, with 62 percent of voters voting “No.”1

Meitzner is not the only council member to brag of no city sales tax in Wichita. Just a month after the November 2014 election in which Wichita voters rejected the sales tax, Wichita City Council Member James Clendenin (district 3, southeast and south Wichita) said, in a council meeting, “thanks to a vote we just had, [Wichita] has zero municipal sales tax.”2

I wonder: If the Wichita city sales tax had passed, would Meitzner and Clendenin feel the same way?

The answer is “No.” If the sales tax had passed, I believe Wichita city council members Pete Meitzner and James Clendenin would be congratulating themselves on the wisdom and foresight that led them to allow Wichitans to vote on the tax. They would be boasting of their ability to gauge the sentiment of public opinion. They would be proud of the investment they are making in Wichita’s future.

That’s important to remember. The city council, at its initiative, decided to place the sales tax on the ballot. Why would the council do this if it did not believe the tax was a good thing for the city?

Because if the tax would not be good for Wichita, then we have to wonder: Why did the Wichita City Council — including Pete Meitzner and James Clendenin — decide that the people of Wichita should vote on a sales tax? Was it a whim? A flight of fancy? Just a poll to gauge public opinion, without binding meaning?

Anyone can conduct a poll of public opinion. But when the Wichita city council places a measure on the ballot asking whether there should be a sales tax, the results have meaning. The results are binding. There will be a new tax, if a majority of voters agree.

Say, what should we ask the city council to let us vote on this November?

We have to ask: Why would Wichita city council members allow Wichitans to vote on a tax they didn’t — personally — believe in? There is no good answer to this question. So when we see city council members boasting of no city sales tax in Wichita, remember this was not their preference. This is especially important because the city told us we needed to spend $250 million of the tax on a new water supply. Now we know that we can satisfy our future needs by spending much less, at least $100 million less.3

Lily Tomlin once said “No matter how cynical you become, it’s never enough to keep up.” Here we have two Wichita city council members illustrating and reinforcing the truth of Tomlin’s observation.