Can you fill in the blank?

Wichita City Council says: “By allowing Cessna to avoid paying property taxes, we are showing our support for the company.”

“By requiring other companies to pay their full share of property taxes, we are showing our ________ for these companies.”

Yesterday’s action taken by the Wichita City Council regarding economic development incentives granted to Cessna Aircraft Company through the Industrial Revenue Bond program may be confusing to some people. The Wichita Eagle is not helping citizens understand what is happening when the city issues IRBs. The headline and lede of the article illustrate: “Wichita approves $40.2 million in industrial revenue bonds for Cessna improvements.”

The bonds are a sideshow and not economically relevant. In fact, Wichita has a related program called EDX that implements the benefits of IRBs without the charade of a company buying its own bonds. The Eagle gets around to this, explaining: “Industrial revenue bonds are issued by governments without any taxpayer liability, a type of municipal bond repaid from the proceeds of bond sales. They do not affect the tax revenue or the credit of the issuing governmental entity. The company will buy its own bonds.”

This explanation isn’t accurate, however. IRBs do affect the tax revenue of the issuing governmental entity, because property purchased under the program is exempt from property taxation, and often sales tax. The article does finally explain why Cessna is applying for the IRBs: “The value of the abated taxes could be as much as $37,197 for the first year.”

That — or something like it — should have been the headline to this article. The fact that Kansas law grants tax abatements for bond-purchased property is the only reason that Cessna applied for the IRB program. As Wichita City Council Member and Vice Mayor Pete Meitzner (district 2, east Wichita) explained from the bench and as quoted by the Wichita Eagle: “I’d like to confirm to the public that what we’re doing is voting to allow Cessna to purchase $40 million of their own bonds for all these improvements.”

Clendenin also expressed appreciation for their charitable nature and their “humongous” heart. I wonder: Why doesn’t Cessna pay the same taxes that everyone else has to pay so that we may keep more of our own money to be charitable as we see fit?

In their remarks, no member of the Wichita City Council made the argument that is often used to justify economic development incentives: economic necessity. No one proffered that absent these tax breaks, Cessna would be unwilling or unable to make this investment. No one wondered that given that Cessna is such a good corporate citizen, why does it ask to be excused from shouldering the same tax burden that almost everyone else has to bear?

No one spoke on behalf of the other business firms in Wichita that, when wanting to make an investment to expand and hire people, are not able to qualify for the type of favored treatment that companies like Cessna receive.

No one offered any evidence that these jobs are somehow different from other jobs in Wichita that area created every day without companies receiving special tax treatment.

No one argued that the tax burden should be applied fairly and evenly to everyone.

No one made the moral case for free enterprise — rather than cronyism and business welfare — as the way to grow and diversify the Wichita economy. 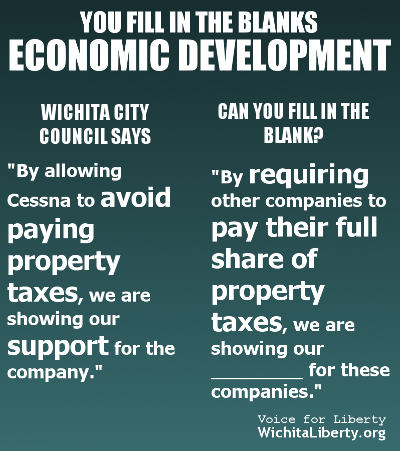