According to the most recent edition of Wichita’s Performance Measure Report, the city’s debt levels are projected to rise, based on two measures.

One measure, named “Outstanding Net General Obligation Debt as a Percentage of Assessed Value,” will nearly triple in value from a recent low. In 2011 this measure was 1.25 percent. In 2015 the target value is 3.59 percent. The nearby chart shows this graphically (click for a larger version.) 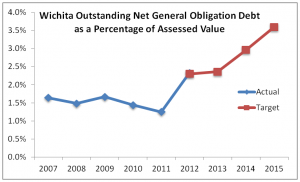 Describing this measure, the city document explains “The level of outstanding debt as a percentage of assessed valuation is based on currently anticipated debt needs of the 2011-2020 Adopted Capital Improvement Program. The percentage is expected to increase as additional debt financing projects are implemented.”

In “Factors impacting outcomes,” the city explains “Slow assessed valuation growth coupled with increasing debt will lead to an increase in this measure.” 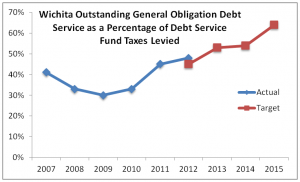 The performance report describes this measure: “This is a measure of flexibility; if the percentage is lower, there are more future opportunities to initiate projects paid for with bonds.”

The document also explains: “In the past, the City of Wichita’s borrowing needs have been lower because more projects were paid for with cash, rather than bonds.” Additionally, “Anticipated debt issuances will increase, based on programmed CIP improvements.”